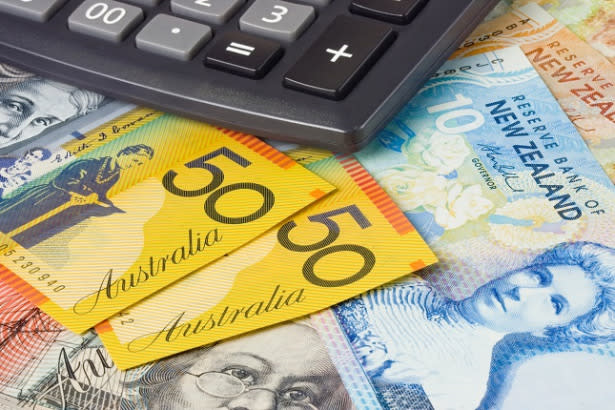 The Australian and New Zealand Dollars spiked higher late in the session on Friday as Federal Reserve Chair Jerome Powell signaled the U.S. central bank will remain patient as it tries to nurse the economy back to full employment.

The Aussie and Kiwi started the session lower with the latter pressured after Prime Minister Jacinda Ardern announced that a lockdown against COVID-19 in Auckland is likely to remain in place for another two weeks.

In U.S. economic news, the Personal Consumption Expenditures Index, which shows changes in the prices of goods and services purchased by consumers and is the Fed’s favorite inflation indicator rose 4.2% in July from the same time last year and 0.4% from the previous month, the Commerce Department reported Friday.

Additionally, the University of Michigan’s final consumer sentiment data for August came in at 70.3, reinforcing a dramatic decline seen in the preliminary reading two weeks earlier. However, Surveys of Consumers chief economist Richard Curtin cautioned that the sharp decline could be temporary, particularly due to health concerns caused by the delta variant of COVID-19, and doesn’t necessarily signal a coming economic slowdown.

New Zealand on Friday extended pandemic restrictions by four days after which they will be eased slightly, although businesses and schools will remain shut and the biggest city Auckland will be locked down for longer.

Powell’s comments fueled a knee-jerk reaction in the AUD/USD and NZD/USD, which means the rallies should be short-lived. Traders had to react because U.S. Treasury yields fell after the Fed Chairman’s speech.

Given next Friday’s U.S. Non-Farm Payrolls report, the U.S. Consumer Inflation the week after and the September 21-22 Federal Reserve policy meeting, the rally could come to an end if any of these events steer the Fed into an early tapering.

Over the short-run, we’re looking for the Aussie and Kiwi to basically track the movement in Treasury yields. A further weakening of U.S. Treasury yields will underpin the AUD/USD and NZD/USD.

Smartphone shipments across the globe fell by 6 per cent in Q3 2021 as vendors struggled to meet the demand for devices amid component shortages, … END_OF_DOCUMENT_TOKEN_TO_BE_REPLACED