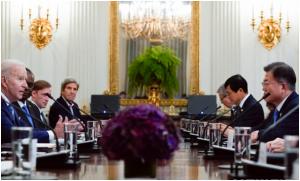 South Korean President Moon Jae-in (far right) and U.S. President Joe Biden (far left) at their summit at the White House on May 21

South Korean enterprises announced their 44 trillion won investment plan at the Korea-U.S. Business Roundtable the U.S. Department of Commerce hosted on May 21. Under the circumstances, China’s response is drawing attention.

The closer U.S.-South Korea cooperation in the semiconductor, electric vehicle (EV) battery and biotech industries is likely to irritate China. In the past, China inflicted economic retaliation against South Korea with regard to U.S. THAAD deployment in South Korea.

“Building plants in China with universal technologies while cooperating with the United States in sectors requiring advanced technologies can be an example of the tactful response,” said Sogang University honorary professor Ahn Se-young, adding, “A more prudent approach is necessary when it comes to investment in China that is less protected by the Chinese government.”

Mystery mummies from Central Asia have a surprising ancestry. These people, who displayed facial characteristics suggesting a European heritage, … END_OF_DOCUMENT_TOKEN_TO_BE_REPLACED

By Kate Bennett and Kate Sullivan, CNN The White House said Wednesday it would not be hosting a traditional Halloween celebration this year due to … END_OF_DOCUMENT_TOKEN_TO_BE_REPLACED