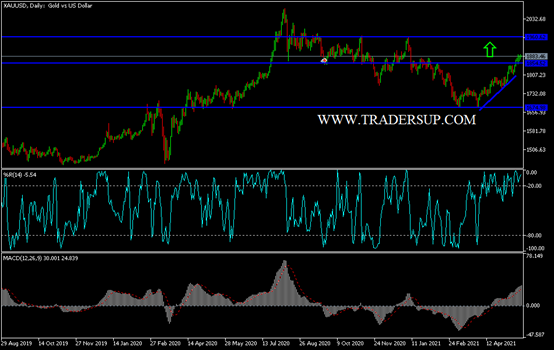 The strong equity markets led to a certain extent and the stability of the dollar amid continued optimism about the economic recovery weakened the demand for the yellow metal. During last week’s trading, gold futures contracts rose by 2.1%, and in the same performance, silver futures closed at $ 27.48 an ounce, while copper futures settled at $ 4.4810 a pound.

On the economic side, Eurozone PMIs as well as UK retail sales numbers indicated an economic recovery in Europe. According to rapid survey data from IHS Markit, private sector activity in the euro area grew at the highest level in three years in May as economies continued to open up by abandoning COVID-19 restrictions. According to the official results, the Composite Production Index – which includes the manufacturing and services sectors – rose to 56.9 from 53.8 in the previous month. The result was expected to moderately rise to 55.1.

UK retail sales increased 9.2% month over month in April, faster than the 5.1% increase in March and economists’ forecasts of 4.5%. It was the largest increase since June 2020, when sales rose 13.9%.

Existing home sales fell for the third month in a row but are still up by 33.9% compared to the same month last year.

The larger-than-expected drop in jobless claims makes the lowest number since the week ending March 14th, when it fell to 256K. Labor Ministry data also showed that the number of continuing claims rose unexpectedly by 111,000 last week to 3.75 million, its highest level in seven weeks.

The current coronavirus situation is one of the strong reasons for pushing gold to achieve its record gains. Of course, the situation in India is a strong influence on investor sentiment. Doctors in India are battling a deadly fungal infection that affects COVID-19 patients or those who have recovered from the disease amid a record wave of infections that have pushed the country’s death toll to nearly 300,000. The life-threatening condition, known as mucosal fungus, is relatively rare. But doctors suspect that the sudden increase in infections could further complicate India’s fight against the pandemic.

India has reported more than 26 million confirmed cases of coronavirus since the start of the pandemic, nearly half of which have occurred in the past two months. On Sunday, the Indian Ministry of Health reported 3,741 new deaths, bringing the number of confirmed deaths in India to 299266. It also reported 240,842 new infections, as daily cases remained below 300,000 for a week. The numbers are almost certainly underestimated, with many cases likely to be missed due to limited testing.

According to the technical analysis of gold: On the chart of the daily timeframe, the price of gold is still moving within an ascending channel, and the strong bulls’ control is currently still supporting the move towards the psychological resistance level of 1900 dollars per ounce. At the same time, the price of gold moved towards it and higher, which will push the technical indicators to strong buying saturation levels, with the effect of which sales are expected to reap profits. On the downside, the closest support levels for gold are currently 1865, 1845 and 1820, respectively. A move below the latest level would turn the current general trend down.

The price of gold will be affected today by the level of the US dollar and the extent to which investors are willing to take risks or not, as well as the reaction from the course of a virus outbreak that may threaten global efforts to reopen global economic activity

In summer 2019, a new Facebook user named Carol Smith signed up for the platform, describing herself as a politically conservative mother from … END_OF_DOCUMENT_TOKEN_TO_BE_REPLACED

WASHINGTON — Joe Biden’s pitch during the 2020 campaign to unseat President Donald J. Trump was simple: Trade in a stubborn, immovable leader for one … END_OF_DOCUMENT_TOKEN_TO_BE_REPLACED