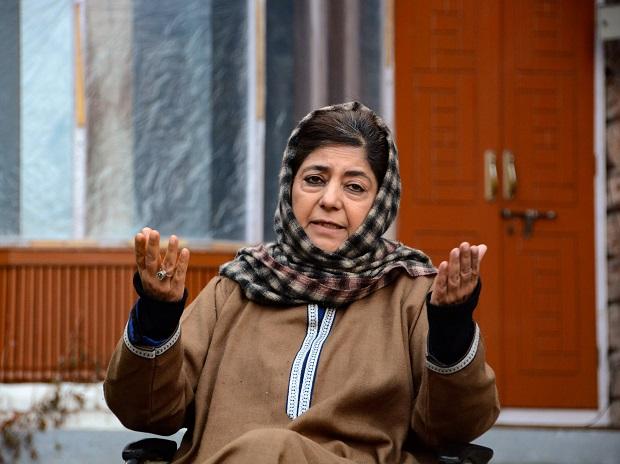 Jammu and Kashmir PDP president Mehbooba Mufti said on Saturday that she had no faith in the delimitation commission which was “working on the BJP’s agenda”.

She also accused the BJP of using National Investigation Agency (NIA) and Enforcement Directorate (ED) to demoralise her party because of its moves to expose the saffron party’s “false narratives” but said “the PDP is not going to be cowed down by such steps”.

“As far as the delimitation commission is concerned, it is BJP’s commission. Their attempt is to pitch the majority against the minority and further disempower the people. They want to increase the (assembly) seats in such a way to benefit the BJP,” Mehbooba told reporters after addressing a youth convention in Rajouri district.

She said the PDP has no faith in the delimitation commission.

Asked for her comment on the decision of the National Conference to participate in the delimitation commission’s associate members meeting in New Delhi next week, the former chief minister said, “It is their decision and what else can I say about that.”

On the Jammu and Kashmir government’s changes in the land use laws enabling conversion of agricultural land to non-agricultural purposes, Mehbooba claimed that it is a wrong decision and part of a “conspiracy of the hidden agenda of the BJP”.

“They want more and more people from outside to come and buy land here to engineer a demographic change,” she alleged.

About NIA’s reported summon to PDP district Development Council (DDC) member and vice chairman DDC Ganderbal Bilal Ahmad to New Delhi for questioning in connection with a case on December 23, Mehbooba said since her party is raising its voice against their narrative and debunks their claim of restoration of normalcy in Jammu and Kashmir, they are “using ED and NIA to silence the party”.

“They don’t have anything else against us. They cannot fight us politically and hence they are using ED and NIA to demoralise us. However, the PDP is not going to be cowed down by such moves and we are not going to stop,” she said.

(Only the headline and picture of this report may have been reworked by the Business Standard staff; the rest of the content is auto-generated from a syndicated feed.)

Business Standard has always strived hard to provide up-to-date information and commentary on developments that are of interest to you and have wider political and economic implications for the country and the world. Your encouragement and constant feedback on how to improve our offering have only made our resolve and commitment to these ideals stronger. Even during these difficult times arising out of Covid-19, we continue to remain committed to keeping you informed and updated with credible news, authoritative views and incisive commentary on topical issues of relevance.
We, however, have a request.

As we battle the economic impact of the pandemic, we need your support even more, so that we can continue to offer you more quality content. Our subscription model has seen an encouraging response from many of you, who have subscribed to our online content. More subscription to our online content can only help us achieve the goals of offering you even better and more relevant content. We believe in free, fair and credible journalism. Your support through more subscriptions can help us practise the journalism to which we are committed.

Johnson County will join Carter and Washington counties in a redrawn 3rd District of the Tennessee Senate.Meanwhile, Unicoi County will be moved out … END_OF_DOCUMENT_TOKEN_TO_BE_REPLACED

The IL-6 family of proteins has a bad reputation: it can promote inflammation, arthritis, autoimmune disease and even cancer. However, a new USC-led … END_OF_DOCUMENT_TOKEN_TO_BE_REPLACED

Biden came to office aiming to focus his foreign policy on the needs of the US middle class. Ending the pandemic, rejuvenating the nation, addressing … END_OF_DOCUMENT_TOKEN_TO_BE_REPLACED