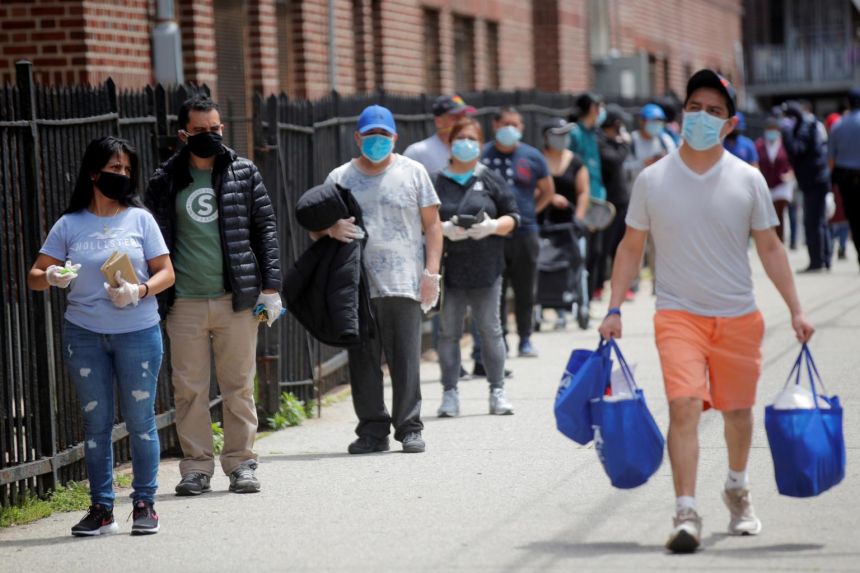 “Figures don’t lie, but liars do figure” is a quip attributed to Mark Twain. Case in point: the figures in the U.S. Bureau of Labor Statistics jobs report for July. These state an unemployment rate of 5.4% plus 943,000 new jobs — and yet do not accurately reflect what is happening to U.S. workers. These are the figures that the mass media is relying on to argue that the U.S. economy has rebounded from COVID-19.

Only a few stories in the torrent of upbeat news reports mention the fact that — even with an average of more than 830,000 new job hires over the past few months — the U.S. economy still has a shocking 5.8 million fewer jobs than in February 2020.

Most of the data the BLS collected for its July report came from the first half of July, before the surge in COVID-19 cases from the Delta variant.

The mass media is widely reporting the optimistic 5.4% unemployment rate. But the BLS report has a broader figure for unemployment that includes discouraged workers and workers who can’t find full-time jobs, even though they want those jobs. Currently this rate is 9.2%.

Besides the information the BLS gathers on the whole economy, it produces reports on particular components of the economy — on women, the Black community, Latinx, Asian American, Indigenous communities, as well as youths. This BLS information reflects that economic stress falls with discriminatory impact on workers who belong to historically oppressed groups.

When the pandemic hit, the labor participation rate in the Black and Latinx communities declined by 5.2% and 5.9% points . . . “due at least in part to higher rates of COVID infections among these groups, school closings leaving students at home . . . as well as these groups being less able to telecommute.” (New York Federal Reserve, May) Many studies have confirmed the far more serious illness and mortality rates of COVID-19 in communities of color.

The new Delta variant surge will intensify pressure keeping Black and Latinx women outside the labor force. In general women are the wage earners who stay home to care for children displaced from in-school attendance. Since February 2020, 2.3 million women have left the labor force, cutting female participation in jobs to a 1988 level. (cnbc.org, Feb. 8)

But there are substantial differences between these rates in different communities, due to racism. For example, the unemployment rate for Black men is 8.4%, while for white men it is 4.9%.

Businesses and investors in the U.S. economy need accurate, timely and detailed information from the BLS about how and what workers are producing in various sectors. That information is the bedrock on which capitalists build plans on how to exploit the workers who create their profits.

And what piece of BLS statistics get trumpeted in Big Business media is part of spinning the news toward capitalist profit.

Unions and organizations representing women, as well as the Black, Latinx and Asian communities, LGBTQ+ people and people with disabilities want and need detailed statistics, in order to understand what is happening in the economy that will affect them.

What is not revealed in the BLS figures selected by the corporate media is the dreadful impact of a year of COVID job loss and discriminatory damage to workers and communities of oppressed people.

For instance, according to the U.S. Department of Agriculture: “Very low and low food sufficiency during the COVID-19 pandemic affected certain segments of the U.S. population more than others. From January 6 to March 29, Native Hawaiian and Pacific Islander households (27.3%) and American Indian and Alaskan Native households (20.3%) had the highest rates of food insufficiency. Nearly 20% of Black and Hispanic households experienced food insufficiency during this period.” Families with children were particularly affected by COVID-19 induced hunger.

Food insufficiency means people don’t have enough food. In other words, they are going hungry.

Mystery mummies from Central Asia have a surprising ancestry. These people, who displayed facial characteristics suggesting a European heritage, … END_OF_DOCUMENT_TOKEN_TO_BE_REPLACED

By Kate Bennett and Kate Sullivan, CNN The White House said Wednesday it would not be hosting a traditional Halloween celebration this year due to … END_OF_DOCUMENT_TOKEN_TO_BE_REPLACED