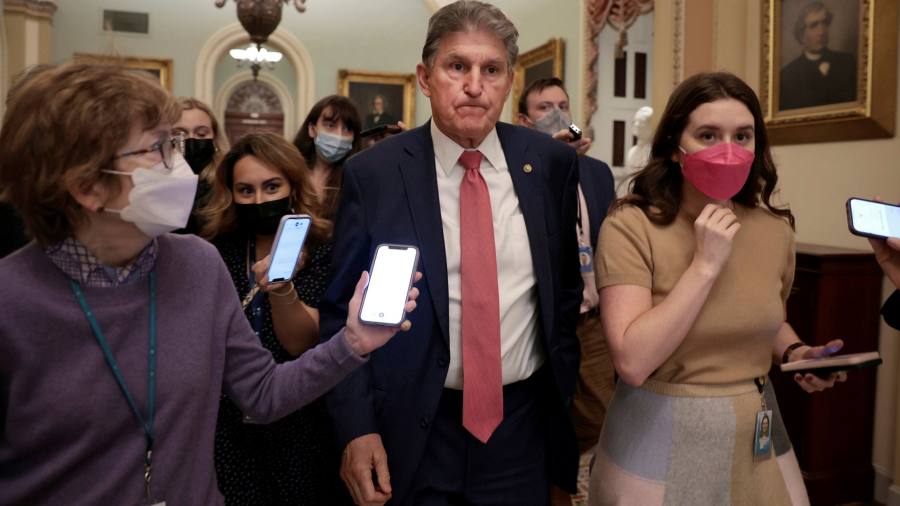 US president Joe Biden suffered a blow to his efforts to pass his signature $1.75tn social spending bill when Joe Manchin, the pivotal Democratic senator from West Virginia, explicitly rejected the package.

“I cannot vote to continue with this piece of legislation. I just can’t. I’ve tried everything humanly possible. I can’t get there,” Manchin said on Fox News Sunday, after weeks of intense negotiations with the White House and Democratic congressional leaders. “This is a no,” he added.

Biden conceded last week that the talks on the legislation — which commits to making large investments in childcare, education and the fight against climate change — could drag on for weeks, although he added that he still expected to “bridge our differences” with Manchin eventually.

However, Manchin’s remarks suggested that the West Virginia senator would either crush the bill by opposing it completely, or was looking for much more fundamental changes and a shrinking of the legislation.

In a subsequent statement on Sunday, Manchin delivered piercing criticism of the legislation: “My Democratic colleagues in Washington are determined to dramatically reshape our society in a way that leaves our country even more vulnerable to the threats we face.

“I cannot take that risk with a staggering debt of more than $29tn and inflation taxes that are real and harmful to every hard-working American at the gasoline pumps, grocery stores and utility bills, with no end in sight.”

Manchin, who has long been a thorn in the administration’s side, representing a deeply conservative state, has warned that the bill could raise inflation and increase America’s debt load. These suggestions have been strongly disputed by the White House and other Democrats since the legislation was overwhelmingly offset by tax increases on the wealthy and large companies.

Manchin’s position is so critical because the US Senate is evenly split, with 50 Democrats and 50 Republicans. Biden’s party holds a narrow edge because Kamala Harris, vice-president, can cast any tiebreaking votes. But for this to happen all Democrats need to support the Build Back Better plan, since it has no Republican backing. BBB has already passed the US House of Representatives.

Failure to pass Biden’s plan would dash the president’s long-held hopes of securing legislation to start remaking the fabric of the domestic US economy — many of the provisions are designed to boost female labour force participation, reduce income inequality, and promote green energy.

It would also have big international ramifications since a number of provisions are aimed at meeting America’s goals laid out at the COP26 climate talks as well as negotiations at the OECD for an overhaul of the global corporate tax regime.

Jen Psaki, the White House press secretary, on Sunday accused Manchin of a “sudden and inexplicable reversal” in his stance as well as a “breach of his commitments” to Democrats and the president.

Psaki pointed out that as recently as Tuesday last week, Manchin had presented a proposal to the White House that was the basis for an “acceptable” compromise before he walked away from the talks.

The criticism of Manchin is the harshest yet from the White House, reflecting its growing frustration at his obstruction of the legislation.

With Manchin’s support, Biden has still passed more than $3tn in economic legislation since taking office in January, including a $1.9tn stimulus plan in March, and a $1.2tn infrastructure spending bill passed last month. But the BBB legislation was particularly important to the progressive wing of the Democratic party. Its long purgatory on Capitol Hill risks raising tensions between the White House and Biden’s liberal base.

Bernie Sanders, a progressive supporter of the bill in the Senate, strongly criticised Manchin on Sunday, demanding that the legislation still be put to a vote in the upper chamber.

“If he doesn’t have the courage to do the right thing for the working families of West Virginia and America, let him vote no in front of the whole world,” Sanders told CNN.

Johnson County will join Carter and Washington counties in a redrawn 3rd District of the Tennessee Senate.Meanwhile, Unicoi County will be moved out … END_OF_DOCUMENT_TOKEN_TO_BE_REPLACED

The IL-6 family of proteins has a bad reputation: it can promote inflammation, arthritis, autoimmune disease and even cancer. However, a new USC-led … END_OF_DOCUMENT_TOKEN_TO_BE_REPLACED

Biden came to office aiming to focus his foreign policy on the needs of the US middle class. Ending the pandemic, rejuvenating the nation, addressing … END_OF_DOCUMENT_TOKEN_TO_BE_REPLACED