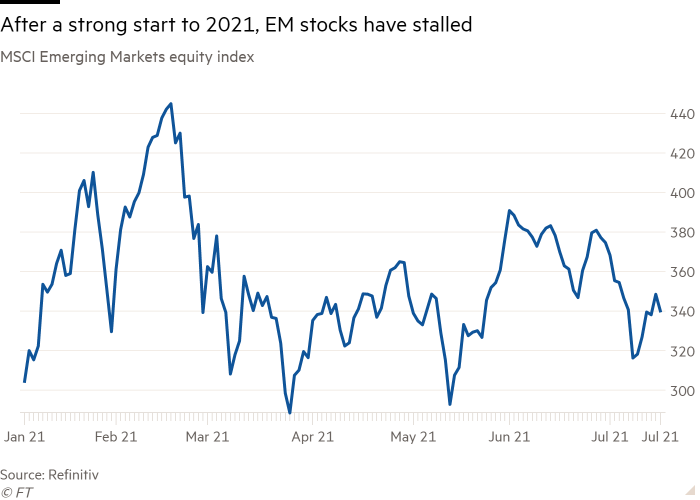 Investors in emerging markets always keep a close eye on the Fed. Right now, it is making them nervous.

Jay Powell, the Federal Reserve chair, has insisted that the US central bank regards the recent surge in consumer price inflation as temporary and will not risk stifling the economic recovery by tightening monetary policy too soon.

But the signals are mixed. Hawkish officials on the bank’s Federal Open Market Committee have suggested the Fed should reduce its support to the economy through asset purchases as soon as September and raise interest rates as early as next year.

For emerging market investors, this is a game changer.

“The Fed has very much accelerated the conversation, from just thinking about inflation, right into rate hikes,” said Phoenix Kalen, emerging market strategist at Société Générale in London. “That creates a very difficult few months while the market recalibrates . . . Before that first hike materialises, the dollar will move much higher.”

A resurgent US dollar spells trouble for fund managers investing in developing countries’ local-currency stocks or bonds, as it eats into the dollar value of those bets.

For much of the pandemic, the dollar weakened against the currencies of the US’s main trading partners. But since a recovery came into view late last year, the picture has changed. After steep fluctuations between January and May, the benchmark DXY dollar index is up more than 3 per cent so far this year.

Meanwhile, EM stocks have stalled. They started the year well but the benchmark MSCI EM index is now more than 7 per cent below its peak in mid-February.

The fear is of more to come. If the Fed raises interest rates to fight inflation, that not only strengthens the dollar; it also enhances the appeal of “safe” assets such as US government bonds, making investors less willing to go in search of higher-yielding, riskier assets elsewhere. This means that even EM assets denominated in dollars or other foreign currencies, such as sovereign and- corporate eurobonds, also suffer.

To add to investors’ difficulties, China’s economic recovery has begun to lose steam. As the world’s second-biggest economy after the US, and for many years a significant driver of developing economies because of its voracious demand for their commodities and other exports, China has as much influence on the performance of EM assets as the US — some analysts would say more.

“That is certainly generating a lot of fears about how fast global growth can recover in a context where China is slowing,” Kalen said.

One indicator of global prospects can be seen in commodity markets. Prices have been on a roll for the past year, with oil recently breaking back above pre-pandemic levels and copper reaching an all-time high. But they are now easing back.

Simon Quijano-Evans, an economist at Gemcorp Capital and a longtime emerging market specialist, believes oil prices have already peaked and food prices will follow within the next few months.

In his view, surging commodity prices and consumer price inflation are both transitory shocks of the kind that EM investors are used to, but that most investors in developed markets have never experienced before.

“For me, there never was a reflation story in place,” he said. “This is more a one-off shock, and it was bigger for developed market participants than EM participants.”

Optimism over the US economy, he argues, has been driven largely by the rollout of vaccines, which has recently slowed just as the Delta variant and others have become an issue in the US and worldwide. This is reflected in US Treasury yields, which rose during the first quarter of this year as investors sold haven assets, but have since fallen back.

The degree of hawkishness priced into EM local debt is on a par with 2018, when the Fed was not only already hiking but hiking more than forecast.

Meanwhile, “the Fed is still buying bonds in big fashion. While there is no change in Fed policy, there is going to be downward pressure on yields whenever these issues happen”, he said.

In the second half of this year, he says, investors will have to be cautious about investing in local currency assets in emerging markets. There will be more one-off shocks to come, from inflation and elsewhere, always against a background of an approaching change in Fed policy.

However, Murat Ulgen, head of emerging markets research at HSBC, says investors may be wrong to obsess about the Fed.

Many emerging economies are much better placed to withstand the disruption of Fed stimulus withdrawal this time, he argues, than they were in the “taper tantrum” shock of 2013-14, when the prospect of lighter support hit emerging market assets hard. Back then, fundamentals such as central bank reserves and external balances were in much worse shape than they are today.

In 2013, EM policymakers were surprised by the Fed’s announcement of an imminent change in policy. This time, many have already begun tightening policy themselves. Last week, Chile’s became the latest in a string of emerging market central banks to raise interest rates in the face of inflation.

“EMs are trying to pre-empt the Fed this time,” Ulgen said. “The degree of hawkishness priced into EM local debt is on a par with 2018, when the Fed was not only already hiking but hiking more than forecast.”

BEIJING, Oct. 24 (Xinhua) -- The following is a summary of published science and technology news of China. SPACE STATION EXPERIMENT SAMPLES The first … END_OF_DOCUMENT_TOKEN_TO_BE_REPLACED