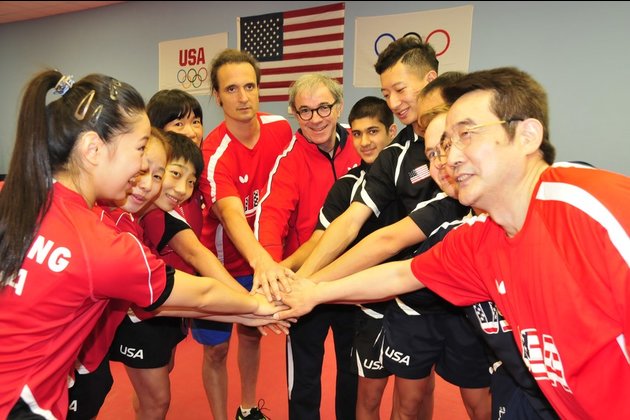 “Though I don’t play professionally now, I do a lot of coaching and I do a lot of business in table tennis,” said Butler, who is currently a muscular specialist in the rehabilitation field. “Table tennis has been a big part of my life forever and I think it’ll always stay that way.”

“What’s most attractive table tennis to me is it just brings me joy and I have a lot, a lot of fun playing it,” he said, adding that table tennis has taught him a lot about life, such as hard work, discipline, teamwork and how to stay positive when things are not going the way one hopes since “that’s the same as life.”

“So I still love to play. I love the friendships that it creates for me. And I love that it keeps you in really good shape,” he said.

Butler especially mentioned the friendship the sport has brought for him with Chinese players and coaches in past decades.

“I’ve spent most of my life in table tennis learning from the Chinese,” he said. “Table tennis really helped me understand the Chinese culture and Chinese people.”

Butler went to China for the first time in 1980, one year after the two countries officially established diplomatic relations.

“I’ll never forget my (first) time in China when I was nine years old,” he recalled. “I just remember the Chinese people were so kind and so curious when we went there because they weren’t used to seeing Americans and they brought their world champion to play with us.”

The former U.S. champion said he is very familiar with the history of Ping Pong Diplomacy which broke the ice in the two decades of estranged China-U.S. relations and eventually led to the normalization of bilateral ties.

“Ping Pong Diplomacy is a very famous event … We’ve all heard about it,” Butler said.

Fifty years ago, the U.S. table tennis team was invited by its Chinese counterpart to visit China at the conclusion of the 31st World Championships in Nagoya, Japan. The U.S. players landed in Beijing on April 10, 1971, becoming the first U.S. group to visit China since the founding of the People’s Republic of China in 1949. The Chinese team paid a return visit the following year.

“I think it’s very special that the sport of table tennis was one of the tools that helped bring more love and friendship between America and China,” he commented. “Ping Pong Diplomacy will always be a very special event that happened for this sport.”

“Table tennis can definitely help friendship because it helps bring people together … That’s why I have met so many great and talented Chinese athletes,” Butler said. “If it did that for me, then it can do that for anyone.”

One fundamental tenet of science is its embrace of uncertainty. At its heart, true science understands that one cannot be 100 percent certain of … END_OF_DOCUMENT_TOKEN_TO_BE_REPLACED

By Betsy Klein, CNN The White House will tout a series of positive milestones for the administration’s pandemic response Tuesday as the nation … END_OF_DOCUMENT_TOKEN_TO_BE_REPLACED