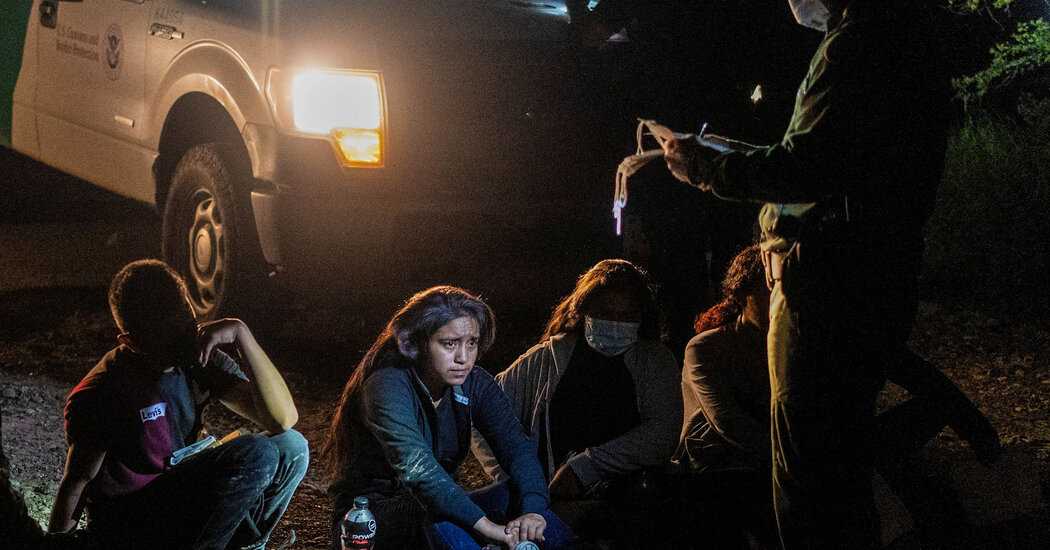 The Biden administration is violating the terms of a longstanding court settlement that requires certain protections for migrant children in government custody, lawyers said in a motion filed on Monday in a federal court.

The filing describes “shockingly deplorable” conditions at two emergency shelters set up in Texas this year to help house a record number of children caught crossing the border with Mexico. It draws on reports from whistle-blowers who have worked at the shelters — one in Pecos, Texas, the other on the Fort Bliss military base in El Paso — as well as from legal advocates who are allowed limited access.

According to reports included in the motion, children at Fort Bliss lived in “filthy conditions” and slept in large spaces with hundreds of other children. At Pecos, the motion said, children are supposed to clean their living spaces but regularly lack appropriate cleaning supplies. Many of the workers at the shelters are contractors and have little experience caring for children in such situations, it said, which has led to poor care and unnecessarily long stays.

Under a 1997 court decree, known as the Flores settlement, migrant children are to be transferred to state-licensed shelters with specific standards and requirements for care, including education and recreational activities, within three days of being taken into government custody.

While many of the conditions described in the new motion have been previously reported, Monday’s action carries the weight of the Flores case, whose plaintiffs last filed a motion at the beginning of the pandemic.

“These allegations definitely don’t reflect the direction this administration has aspired to,” Wendy Young, the president of the children’s advocacy organization Kids in Need of Defense, said on Monday.

The Department of Health and Human Services, which oversees the shelter system, did not respond to a request for comment.

The Trump administration was broadly criticized for the conditions under which it held migrant children in 2019, the last period when children arrived alone at the southern border in elevated numbers. President Biden promised a more compassionate approach.

After the plaintiffs’ lawyers filed a motion in March 2020, the federal judge overseeing the case, Dolly M. Gee of the United States District Court for the Central District of California, ordered Immigration and Customs Enforcement to release migrant children from three family detention centers because of the risk of Covid-19 spreading in congregate settings.

At the time, there were about 120 children in custody, far from the more than 17,000 migrant children in custody as of Sunday. Judge Gee criticized the Trump administration for inconsistent compliance with recommendations from the Centers for Disease Control and Prevention. She has continued to hold regular status meetings during the pandemic.

For months, the average length of stay for migrant children in the custody of the Department of Health and Human Services has been about a month, longer than the 20-day limit children’s advocates have recommended. While the plaintiffs’ lawyers did not propose shutting down the emergency shelters in their new motion, they argued that younger children and those with special needs be placed in licensed shelters as “expeditiously” as possible, as required by the settlement. And they proposed that the Biden administration provide monthly reports to the court about its efforts to speed the release of the children to family in the United States or other sponsors.

The Department of Health and Human Services, which oversees the care of unaccompanied migrant children, faced a shortage of licensed shelters this spring because of cuts made during the Trump administration and restrictions put in place because of the pandemic. After children were packed into border stations earlier this year for longer than the law allows and in unacceptable conditions, the Biden administration set up more than a dozen emergency shelters in a matter of weeks, relying heavily on contractors.

The emergency shelters have far lower standards. Since early spring, the Biden administration has increased capacity at the licensed shelters. As of last week, about 30 percent of the total number of migrant children in government custody were in emergency shelters.

Children’s advocates and lawyers have said that inexperienced contractors are to blame for many of the problems at the emergency shelters, including a failure to meet the needs of children with mental health challenges and to “protect children from bullying or physical assault.”

As of last week, only four emergency shelters remained open, and more than half of the thousands of migrant housed in the shelters were at Pecos or Fort Bliss, according to internal data obtained by The New York Times.

The internal watchdog at the Department of Health and Human Services recently opened an investigation into reports of substandard conditions and care at Fort Bliss, the government’s largest emergency shelter.

The motion filed on Monday also included reports about deficient measures at the shelters to protect children from exposure to Covid-19.

During a status hearing with Judge Gee on Friday, a representative from the Department of Health and Human Services said the increase in the number of migrant children with Covid-19 because of the highly transmissible Delta variant was stretching the agency’s ability to house them in emergency shelters.

The C.D.C. has sent staff members to each of the emergency shelters to help monitor Covid cases and to provide guidance, an official with the Department of Health and Human Services said on Monday, speaking on the condition of anonymity.

Mystery mummies from Central Asia have a surprising ancestry. These people, who displayed facial characteristics suggesting a European heritage, … END_OF_DOCUMENT_TOKEN_TO_BE_REPLACED

By Kate Bennett and Kate Sullivan, CNN The White House said Wednesday it would not be hosting a traditional Halloween celebration this year due to … END_OF_DOCUMENT_TOKEN_TO_BE_REPLACED