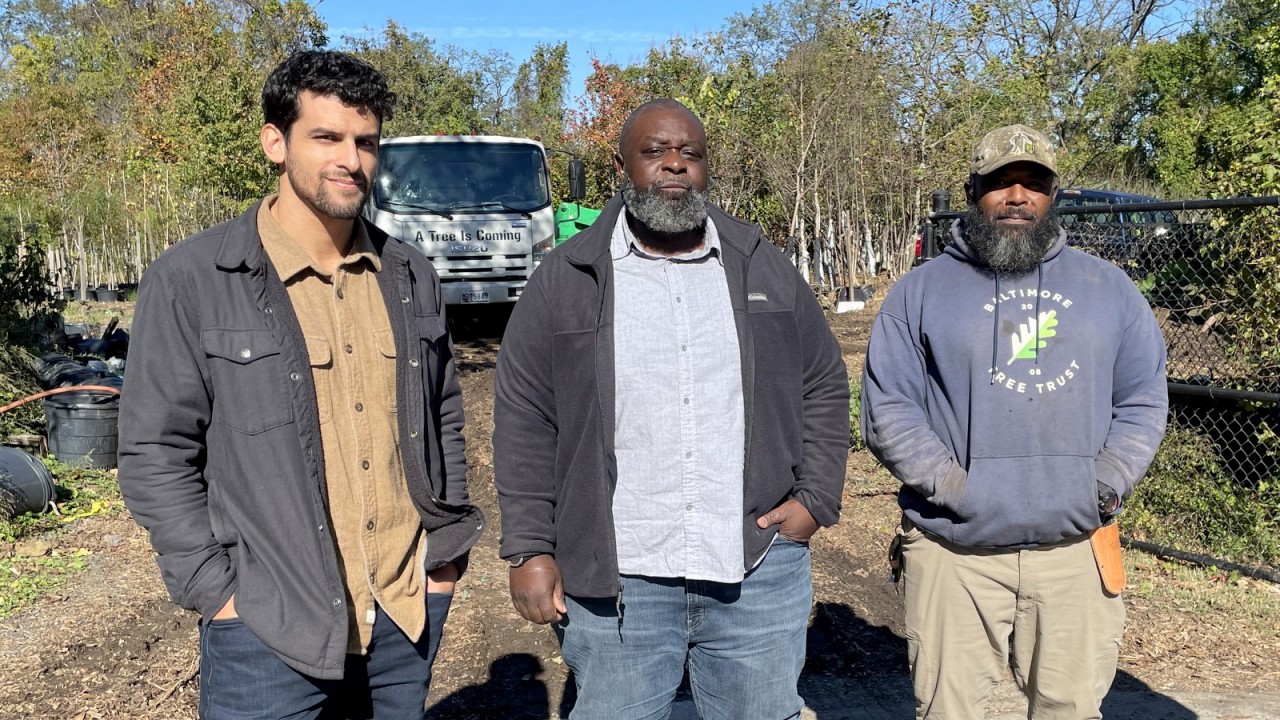 The Baltimore Tree Trust today called on Mayor Brandon Scott and the Board of Estimates to reinstate its low bid for planting 3,000 trees on city streets.

As as result of a minor irregularity, the nonprofit said, its bid was tossed out, allowing the contract to go to “a well-connected, for-profit vendor from Baltimore County” whose bid is 69% higher.

“What is scheduled to happen at the Board of Estimates meeting on Wednesday is an outrage,” declared Bryant Smith, executive director of the Tree Trust at a press conference in Druid Hill Park.

“In a city that’s trying to encourage nonprofits and NGO’s to get contracts to do work in the community, employ local people and train youths, why would they turn us down for minor technicalities,” he asked.

According to the Minority and Women’s Business Opportunity Office (MWBOO), one of the nonprofit’s two WBE subcontractors did not file a corporate renewal application and was “not in good standing” with the city when the bid was submitted.

The subcontractor would have provided supplies worth 2.25% of the full contract, an amount that could easily be absorbed by the other WBE, Smith said.

He said the error originated from MWBOO’s own database, which incorrectly listed the WBE as in good standing.

City regulations allow the board to give a winning bidder 10 days to place a WBE in good standing or make arrangements with another subcontractor to fulfill hiring goals.

In recent years, the Pikesville-based company has gained a near monopoly on grass mowing and landscaping contracts in Baltimore City.

It has won more than $33 million in city contracts, favored by former Mayor Catherine Pugh (who received a $1,000 campaign contribution by company founder Joe Lorenz in 2017) and, more recently, by the Brandon Scott administration.

Between those periods, Lorenz was publicly called out by Mayor Bernard C. “Jack” Young, who accused the company of doing shoddy work and not employing more city youth at a BOE meeting in April 2020.

Young halted approval of $4.7 million of contract renewals to Lorenz at the meeting, only to approve the very same renewals two weeks later with a warning that “I’m looking at all these contracts for duplicity [sic] to see if we need those contracts.”

In April 2021, Lorenz won its most lucrative contract to date – $13 million to mow grass in medians and right of ways maintained by the city Department of Transportation through the spring of 2024.

“This is a circumstance that reveals how broken our procurement system is, how broken City Hall can be,” he said.

The Tree Trust “has been doing this work for years. It has a Black director who has consistently employed residents of Baltimore, many of whom are at-risk youth, many of whom are returning citizens, and gives them skills and a constructive path forward.”

The trust was established in 2008 by Baltimore author Jill Jonnes and arborist Amanda Cunningham.

First chaired by Barbara Shea, wife of the current city solicitor, James L. Shea, early efforts were concentrated on planting trees east of Johns Hopkins Hospital around McElderry Park. They have since expanded to include the entire city.

The organization has now planted 13,000 trees, but says that Baltimore’s tree canopy has only increased about 1% because so many trees have been chopped down or have died through inadequate care.

Louis Middleton, a neighborhood forester employed by the trust, today expressed pride in the group’s impact on poor communities.

“I’m seeing neighborhoods that are degraded, but we’re making them better,” he said.

“I’ve got people asking me, ‘Can you plant a tree on my street?’ I’ve got a job where my kids say, ‘Hey, my dad planted that tree!’”

The political landscape in the United States is always evolving as administrations change and the White House looks forward to a new crop of faces. … END_OF_DOCUMENT_TOKEN_TO_BE_REPLACED

Southern California home prices continued a 1 ½-year, double-digit climb last month, setting a record for the 11th time in just over a … END_OF_DOCUMENT_TOKEN_TO_BE_REPLACED