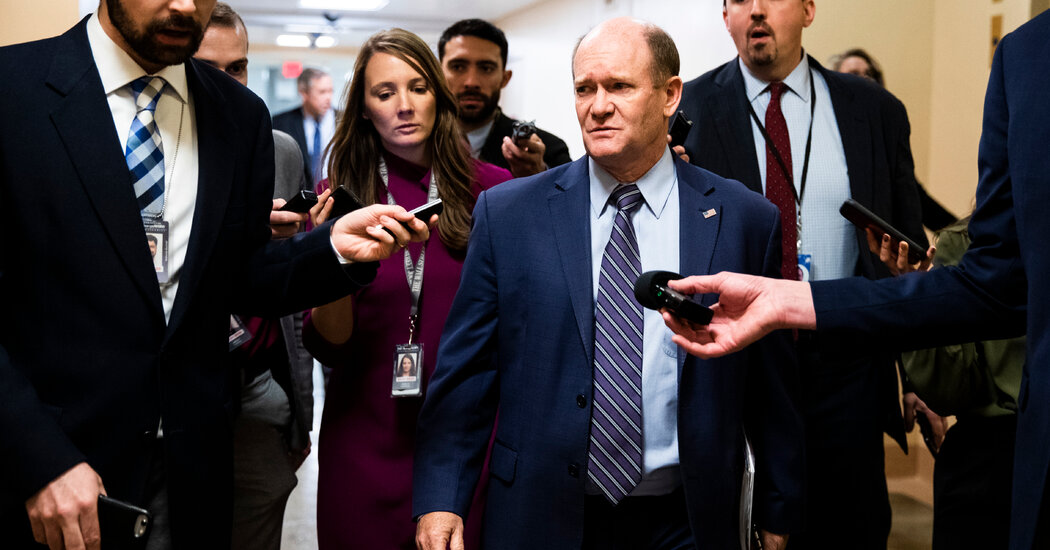 WASHINGTON — Senator Chris Coons, Democrat of Delaware, was hurrying to a vote through the Capitol’s cavernous underground tunnel system on a recent Thursday when his phone rang. It was Pete Buttigieg, the secretary of transportation, calling for a quick briefing before an infrastructure meeting he had scheduled with a group of Republican senators.

Mr. Coons brushed off the reporters trailing him, propped his computer tablet against a railing next to the Senate subway track, and began typing away, taking notes, as he lowered his voice to share the skinny on the Republicans.

“These are Republican senators he doesn’t know,” Mr. Coons said of Mr. Buttigieg after the two hung up. “So it’s just sort of tactical advice about specific members. What are their interests? What’s the background? Do you think there’s room for progress?”

Before the end of the day Mr. Coons’s phone would ring several more times, with various White House officials on the other end — seeking counsel, scuttlebutt and insight that President Biden needed to navigate his agenda through the Senate. Steve Ricchetti, Mr. Biden’s counselor, wanted to talk through various complaints Republican senators had raised. Louisa Terrell, who runs the White House’s Office of Legislative Affairs, called for one of their frequent debriefing sessions.

“They’re trying to figure out what is the best possible bipartisan package of policy and investment on infrastructure that we can get done,” Mr. Coons said.

To trail Mr. Coons on Capitol Hill is to witness how he operates as an extra pair of eyes and ears for the Biden administration in Congress, a kind of consigliere trusted by both the president and the senators — many of them Republicans — whom Mr. Biden needs to succeed.

It is a far less prestigious job than the one that Mr. Coons — who interned for Mr. Biden three decades ago, became his mentee on the New Castle County Council, campaigned for him in Iowa and now holds the seat that once belonged to him — initially sought in the Biden administration, where he had hoped to serve as secretary of state. But it can demand the same kind of shuttle diplomacy and high-stakes negotiation.

On Tuesday, as the two parties went their separate ways for their weekly closed-door strategy sessions, Mr. Coons crossed enemy lines to be a guest at the Republican senators’ lunch, where he was invited to give a briefing as chairman of the Ethics Committee.

In a Senate where the legislative filibuster still rules, effectively imposing a 60-vote threshold to do most anything, Mr. Biden needs at least 10 Republicans to move forward on key elements of his agenda. With centrist Democrats like Joe Manchin III of West Virginia and Kyrsten Sinema of Arizona opposed to scrapping the rule, Mr. Coons often finds himself explaining to allies the difficult political calculus he is facing.

“I’m getting texts from people that are like, ‘Pass the bill!’ and I’m like, I don’t know what part of Sinema and Manchin saying, ‘We will not do this,’ don’t they understand,” he said.

Even so, Mr. Coons — who has moved into the office formerly occupied by Senator John McCain, an Arizona Republican known for his ability to forge bipartisan deals, and proudly displays framed copies of bipartisan bills he has sponsored on the walls — has set out to try to play the same role on a host of major issues Mr. Biden is pursuing.

As he walks the halls, offering himself up as a sounding board for concerns and engaging in side negotiations, Mr. Coons has been involved in bipartisan talks on legislation now before the Senate to increase America’s competitiveness with China in emerging sciences and manufacturing. As a former county executive who oversaw the police, he has been quietly involved in talks on overhauling policing. And he has been urging his fellow Democrats to find a compromise with Republicans on funding infrastructure, which he says could be the biggest public works bill to pass Congress during his tenure.

Senator Todd Young, an Indiana Republican who is a lead sponsor of the competitiveness bill, said Mr. Coons had been a crucial envoy to the White House and a key partner for Republicans, in part because he is perceived to have Mr. Biden’s ear.

“If you need someone to assist in smoothing over hurt feelings, or breaking down barriers, I can think of no one better,” Mr. Young said.

Even so, Mr. Coons has lately begun warning that Congress is running out of time to get big things done. If no bipartisan deals emerge by midsummer, he argued, they will never materialize this term, instead falling victim to partisan politics as the 2022 midterms near.

“If we’re going to do anything bipartisan in this Congress, it kind of has to come together between now and July,” he said.

So Mr. Coons is using what little time there is to turbocharge Mr. Biden’s outreach to Republicans.

On a recent afternoon, he organized a meeting of the Climate Solutions Caucus — five Republicans and five Democrats — to hear ideas from the billionaire Bill Gates on climate-friendly ideas for the infrastructure plan.

During the call, Senator Susan Collins, a moderate Republican from Maine, complained that Jennifer Granholm, the energy secretary, had been unresponsive to her calls for quick implementation of her bill promoting energy storage.

“It’s been frustrating because we can’t even get an answer from the secretary; we’ve contacted her office many times about this,” Ms. Collins said.

“Susan,” Mr. Coons interjected, “I’m happy to weigh in with Granholm — and frankly with some of the White House folks — to say, ‘Hey, I know you’re getting started over there, but time’s a wasting.’”

Immediately after, Mr. Coons was on the phone with Mr. Ricchetti, pressing Mr. Biden’s team to work more closely with Ms. Collins and Mr. Young, who had grown frustrated with the legislative haggling over the competitiveness measure.

“They should get back to Susan Collins,” Mr. Coons later told his staff, with a note of irritation. “We kind of need her.”

In the Senate, many Republicans have come to regard Mr. Coons as a reliable conduit to Mr. Biden.

Leaving his office, the Delaware Democrat passed Senator Roger Wicker, a Mississippi Republican with whom he has worked on policing issues. Mr. Wicker had just left a meeting at the White House.

“I just talked to a friend of yours,” Mr. Wicker said, before invoking Mr. Coons’s degree in ethics from Yale Divinity School. “He said you can preach. I said, ‘I’ve seen it.’”

Mr. Coons also does a fair amount of cajoling of members of his own party. Publicly and privately, he has been pushing for Democrats to take a smaller infrastructure deal, more palatable to Republicans, in the range of $800 billion or $1 trillion, far smaller than the $2.3 trillion package Mr. Biden proposed or his latest offer of $1.7 trillion.

“That would be the single largest infrastructure bill ever,” he said of a pared-down plan. “Cool! What’s the problem?”

After passing a bipartisan bill, he argued, Democrats could take up a second measure through the budget reconciliation process — which is protected from a filibuster and could pass on a party-line vote — that raised taxes on corporations to fund social services like day care programs and free community college. It would be a win-win deal, he argued, giving both parties something to campaign on during the midterm election season.

“The Republicans get the benefit of now being able to beat us up and run against us as, ‘They raised your taxes and they’re wasting it on day care,’” he said. “We get to say, ‘They care more about billionaires’ tax breaks than they do about educating the next generation.’”

Still, hopes for a bipartisan infrastructure deal are looking increasingly dim. Republicans who have offered a $568 billion plan have panned the latest offer from the Biden administration, and the two sides remain far apart on almost every detail.

Mr. Coons lays the gridlock plaguing the Senate at the feet of the Republican leader, Mitch McConnell of Kentucky, who as majority leader turned the chamber into a legislative graveyard for liberal policy bills passed by the Democratic-led House, refusing even to consider major legislation and try to modify it.

“That really eroded our confidence as a Senate,” Mr. Coons said. “You lose the muscle memory of how to really legislate.”

Nevertheless, Mr. Coons said he remained optimistic about the prospects for an infrastructure deal, based on a recent conversation with Senator Roy Blunt of Missouri, the No. 4 Republican and a top negotiator on the plan.