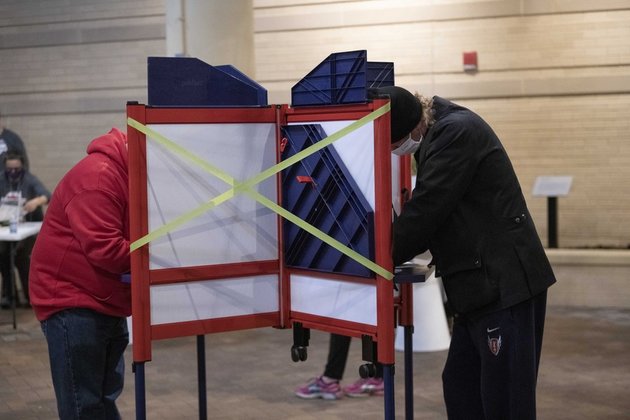 WASHINGTON, Nov. 2 (Xinhua) — The governor’s race in the U.S. state of Virginia is neck and neck, and the result could have major implications for the country’s future political landscape.

The race is happening in a state that has been led by Democratic governors for over a decade.

As Virginians head out to vote on Tuesday, the average of polls from RealClearPolitics, a U.S. political news website and polling data aggregator, showed the Republican candidate was leading by 1.7 percent. The win is still up for grabs, and that could foreshadow the U.S. political environment for the next couple of years, experts said.

In a speech from Norfolk of Virginia on Friday, U.S. Vice President Kamala Harris said the race would be a “bellwether” for what would occur in the near future.

“It’s a close election and it’s a bellwether for what happens in the rest of the country,” she said.

An unusual combination of factors – from the alleged cover-up of a sexual assault in a local school bathroom to how racial justice issues are taught – are playing out in Virginia, part of which borders on Washington D.C., the national capital.

That’s a sharp about-face in a state that Biden, a Democrat, carried by ten points in last year’s presidential elections, and one that has not seen a Republican winning a statewide election since 2009.

The race, between Democrat Terry McAuliffe and Republican Glenn Youngkin, occurs a year after Biden clinched the White House from former President Donald Trump. While Biden got off to a good start, recent months have seen his popularity plummet on issues ranging from his botched withdrawal from Afghanistan, urban crime, and the economy.

Brookings Institution Senior Fellow Darrell West told Xinhua that a Youngkin victory would “signal a way for Republicans to embrace Trumpism without getting too close to Trump himself.”

“It provides a path for 2022 (midterms) and 2024 (presidential race) for GOP candidates to present themselves to voters in ways that resonate in competitive states,” West said.

Clay Ramsay, a researcher at the Center for International and Security Studies at the University of Maryland, told Xinhua that if Youngkin wins, it means “the Democrats have not produced enough on a national level to get a higher turnout from their own Democrats and some independents.”

Youngkin is doing a careful tightrope walk by distancing himself from Trump – the de facto GOP leader, and a polarizing figure in increasingly Democratic Virginia.

McAuliffe has tried to paint Youngkin as a far-right Trump ally, but that strategy may have backfired in the home stretch of the race.

That’s because Youngkin has eschewed Republican Party bigwigs and zeroed in on state-specific issues – particularly education.

Indeed, education stands as the top among Virginians – at 21 percent, six points ahead of jobs, according to a recent WFXR News/Emerson College poll.

The issue has become tense in recent months, as parents in Northern Virginia have grabbed national headlines, lambasting school board officials in public meetings for what they said were plans to teach critical race theory, or CRT.

Many parents in the state believe – rightly or wrongly – that CRT promotes racism and division in society, and the GOP blames this on what they bill the radical left wing of the Democratic Party.

Youngkin recently ran an ad that showed McAuliffe stating in a debate that he didn’t think “parents should be telling schools what they should teach.” McAuliffe later said the statement was taken out of context.

Education has also taken center stage after students took classes online for more than a year during the pandemic. Experts said online learning for children is not as effective as in-person study in a classroom environment.

Many parents are concerned that their children have lost a year or more of education, and many have expressed that they are feeling anxious over the issue.

Christine Hayden, a manager in a small company in her 50s, told Xinhua she’s concerned about the possibility of teaching CRT in schools. She is also outraged about the alleged sexual assault in the school bathroom that officials allegedly covered up.

Stephanie Newman, an office worker in Virginia in her 40s, told Xinhua she would never vote Republican, mostly because of Trump.

One fundamental tenet of science is its embrace of uncertainty. At its heart, true science understands that one cannot be 100 percent certain of … END_OF_DOCUMENT_TOKEN_TO_BE_REPLACED

By Betsy Klein, CNN The White House will tout a series of positive milestones for the administration’s pandemic response Tuesday as the nation … END_OF_DOCUMENT_TOKEN_TO_BE_REPLACED