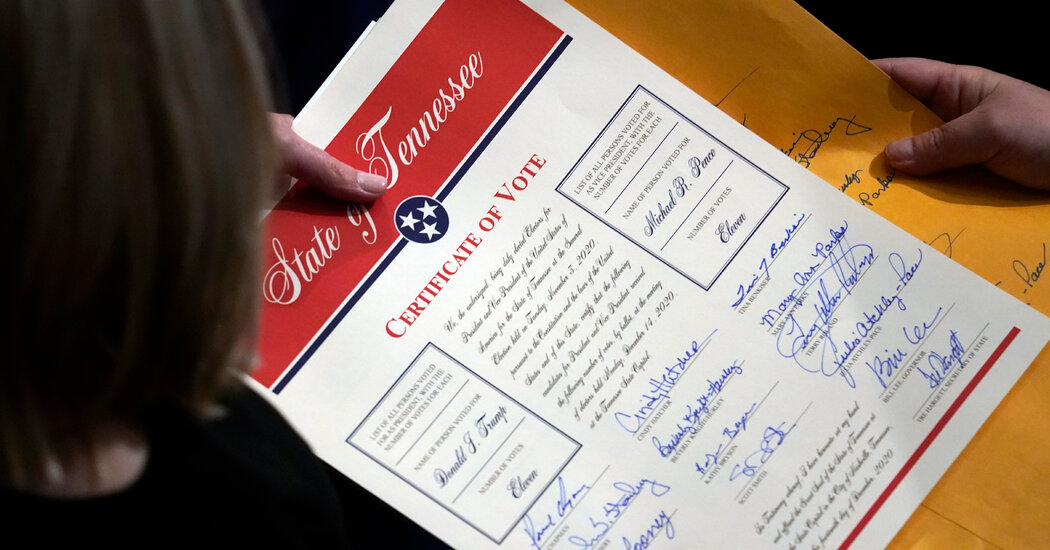 WASHINGTON — Key senators working on an overhaul of the little-known law that former President Donald J. Trump and his allies tried to use to overturn the 2020 election pledged on Sunday that their legislation would pass the Senate, saying that recent revelations about the plot made their work even more important.

In a joint interview on CNN’s “State of the Union,” Senators Joe Manchin III, Democrat of West Virginia, and Lisa Murkowski, Republican of Alaska, said their efforts to rewrite the Electoral Count Act of 1887 were gaining broader support in the Senate, with as many as 20 senators taking part in the discussions.

“Absolutely, it will pass,” Mr. Manchin said of an overhaul of the law, which dictates how Congress formalizes elections.

He said efforts by Mr. Trump and his allies to exploit “ambiguity” in the law were “what caused the insurrection” — the Jan. 6, 2021, attack on the Capitol. That misreading of the statute led to a plan by Mr. Trump and his allies to amass a crowd outside the Capitol to try to pressure Congress and Vice President Mike Pence, who presided over Congress’s official count of electoral votes, to overturn the results of the election.

Ms. Murkowski said the rewrite could be expanded to include other protections for democracy, such as a crackdown on threats and harassment against election workers.

“We want to make sure that if you are going to be an election worker,” Ms. Murkowski said, “you don’t feel intimidated or threatened or harassed.”

A bipartisan group of at least 15 senators — which includes Mr. Manchin and Ms. Murkowski and is led by Senator Susan Collins, Republican of Maine — recently began discussions with another group that features top Democrats who have studied the issue for months. That group includes Senator Angus King, independent of Maine; Senator Amy Klobuchar, Democrat of Minnesota; and Senator Richard J. Durbin, Democrat of Illinois.

Mr. King’s group last week released draft legislative text for a rewrite of the Electoral Count Act that would address deficiencies exposed by Mr. Trump’s plan. The bill would clarify that the vice president has no power to reject a state’s electors and ensure that state legislatures cannot appoint electors after Election Day in an effort to overturn their state’s election results.

It would also give states additional time to complete legitimate recounts and litigation; provide limited judicial review to ensure that the electors appointed by a state reflect the popular vote results in the state; enumerate specific and narrow grounds for objections to electors or electoral votes; raise the thresholds for Congress to consider objections; and make it harder to sustain objections without broad support by both chambers of Congress.

In an interview with The New York Times, Mr. King called his group’s draft “very nonpartisan” and said it included the input of conservative and liberal legal scholars.

“Hopefully we can join forces and get a good bill,” Mr. King said of Ms. Collins’s group.

The latest push to clarify the law follows a series of revelations about a campaign by Mr. Trump and his allies to try to overturn the 2020 election, including the surfacing of memos that show the roots of the attempts to use so-called alternate electors to keep Mr. Trump in power and the former president’s exploration of proposals to seize voting machines.

On Friday, Mr. Pence offered his most forceful rebuke of Mr. Trump’s plan, saying the former president was “wrong” to insist that Mr. Pence had the legal authority to overturn the results of the election. Those comments came on the same day the Republican National Committee voted to censure two members of the party, Representatives Liz Cheney of Wyoming and Adam Kinzinger of Illinois, in a resolution that described the events of Jan. 6 as “legitimate political discourse.”

Ms. Cheney and Mr. Kinzinger are the only Republican members of the special House committee investigating the Jan. 6 attack, which left more than 150 police officers injured and resulted in several deaths.

The resolution drew criticism from some congressional Republicans on Sunday.

Representative Michael McCaul, Republican of Texas, said on ABC’s “This Week” that he did “not agree with that statement — if it’s applying to those who committed criminal offenses and violence to overtake our shrine of democracy.”

In an interview on NBC’s “Meet the Press,” Marc Short, Mr. Pence’s former chief of staff, said that “from my front-row seat, I did not see a lot of legitimate political discourse.”

Mr. Short blamed Mr. Trump’s push to overturn the election on “many bad advisers who were basically snake-oil salesmen, giving him really random and novel ideas as to what the vice president could do.”

He described being taken to a secure room in the Capitol with Mr. Pence on Jan. 6 as rioters stormed the building, some chanting, “Hang Mike Pence.” He said Mr. Trump and Mr. Pence did not talk that day.

Mr. Short and another top Pence aide, Greg Jacob, recently testified before the committee, a step Mr. Pence’s advisers have hoped would stop the committee from issuing a subpoena for Mr. Pence. Representatives of Mr. Pence have been negotiating with the committee’s lawyers for months.

“That would be a pretty unprecedented step for the committee to take,” Mr. Short said of a subpoena for the former vice president, adding that it would be “very difficult for me to see that scenario unfolding.”

The political landscape in the United States is always evolving as administrations change and the White House looks forward to a new crop of faces. … END_OF_DOCUMENT_TOKEN_TO_BE_REPLACED

Southern California home prices continued a 1 ½-year, double-digit climb last month, setting a record for the 11th time in just over a … END_OF_DOCUMENT_TOKEN_TO_BE_REPLACED