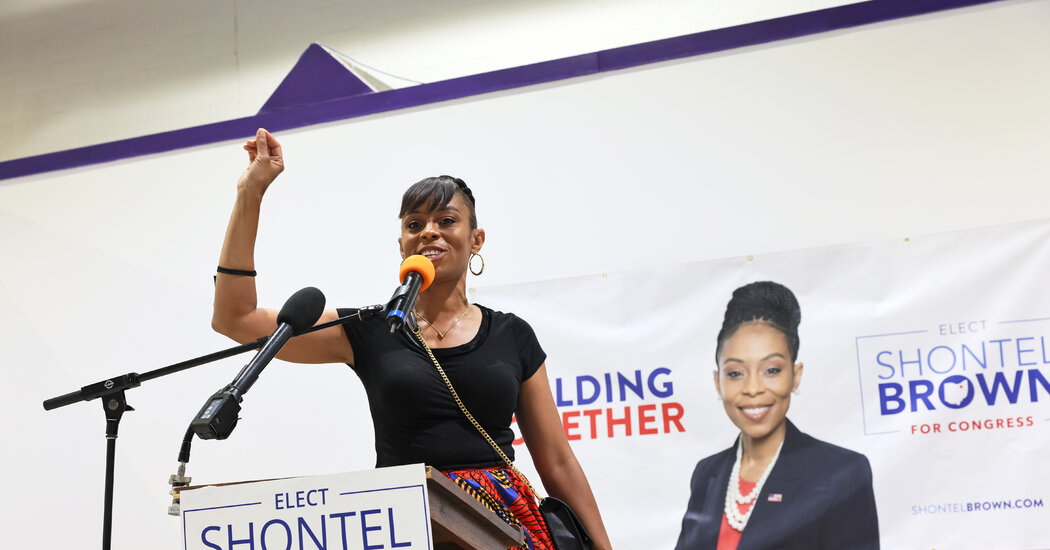 Shontel Brown campaigned for an open House seat in the Cleveland area declaring that she would be “a partner,” not an adversary, of President Biden and Speaker Nancy Pelosi. And now that she is almost guaranteed to join them in Washington after her victory on Tuesday in a contentious Democratic primary, Ms. Brown’s history suggests that party leaders will be adding a loyal political insider to their team.

Ms. Brown’s triumph on Tuesday night over Nina Turner, a former state senator who had broad support from national progressive leaders and activists, was in no small part thanks to her receiving the same kind of institutional support from her party that elevated her as a rising star in Cleveland politics in recent years.

She started about as small as it gets in politics, winning a seat on the City Council in Warrensville Heights, a small suburb of Cleveland, in 2012. From there she won election to the Cuyahoga County Council, the legislative body for Ohio’s second-most-populous county.

Her ascent continued in 2017 after Cleveland-area Democratic leaders rallied behind her push to lead the Cuyahoga County Democratic Party, which had been troubled by endemic corruption that ultimately led to a 28-year prison sentence for its former chairman. A federal investigation swept up dozens of other county officials and contractors.

Ms. Brown won the bid, becoming the first woman and the first Black person to hold the position. She was only 42 at the time. She enjoyed the backing of Representative Marcia Fudge, whom she has described as her mentor and whose former seat she is poised to fill after the November election. The district is heavily Democratic, virtually assuring Ms. Brown’s victory.

Ms. Brown is no stranger to the kind of pressure that the left flank of her party mustered to try to defeat her on Tuesday. In 2018, she survived an attempt by progressive activists to take control of the Cuyahoga County party committee and unseat her as chair. She easily won re-election by a 2-to-1 margin. She characterized her victory at the time as a sign that the party’s internal political differences were settling down, saying, “We have stability in our leadership.”

The kind of stability that she was seeking has been tenuous, however, as her hard-fought race against Ms. Turner, a party outsider and liberal activist, showed. Ms. Brown has pitched herself as the kind of politician “who can work with the administration” and Democratic leaders in Congress.

In summer 2019, a new Facebook user named Carol Smith signed up for the platform, describing herself as a politically conservative mother from … END_OF_DOCUMENT_TOKEN_TO_BE_REPLACED

WASHINGTON — Joe Biden’s pitch during the 2020 campaign to unseat President Donald J. Trump was simple: Trade in a stubborn, immovable leader for one … END_OF_DOCUMENT_TOKEN_TO_BE_REPLACED