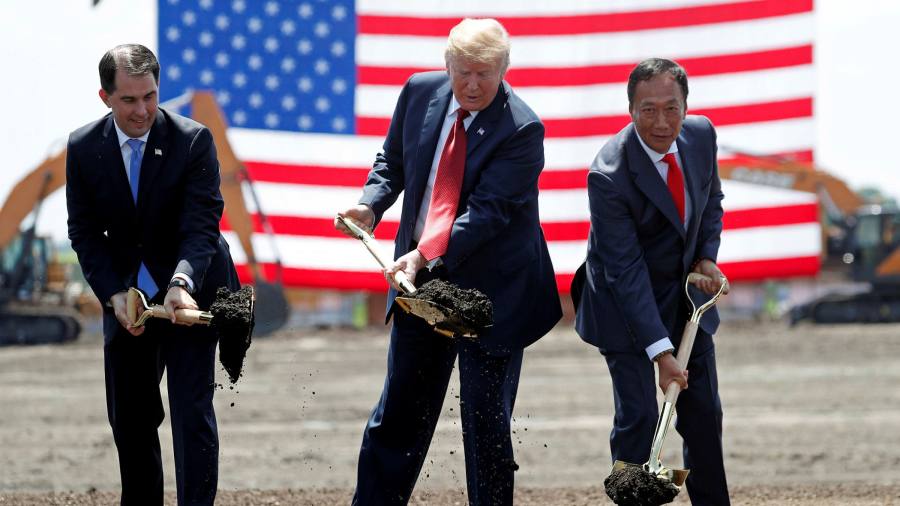 Business has hardly ever been this political for technology companies. Taiwan Semiconductor Manufacturing Company is pouring $100bn into new fabrication plants, or fabs, over the next three years. In doing so, the world’s largest contract chipmaker is carefully balancing the demands on that capacity from the geopolitical rivals that are driving its growth: the US and China.

The glaring example of an attempt to manage this balance gone badly wrong is Foxconn, the world’s largest contract electronics manufacturer. Four years after it pledged to build a huge liquid crystal display panel factory in Wisconsin, it is still dealing with the fallout of failing to follow through.

Both Taiwanese tech giants are up against political pressures emanating from the US-China strategic competition. In TSMC’s case, Washington pushed for more chip manufacturing to happen in the US, at the very least for input into the defence-related supply chain. The message was clear enough to convince TSMC to build a $12bn plant in Arizona.

Foxconn feels the US-China rivalry just as much, with US tariffs and security concerns forcing it to shift assembly of some products out of China. But the original sin behind its Wisconsin troubles is electoral politics rather than broader global tensions.

Terry Gou, Foxconn founder, inked the deal in 2017. Then US president, Donald Trump, was keen to promote the deal — he had narrowly won Wisconsin and wanted to keep the state in Republican hands in congressional elections.

“It served the interests of the two,” says Patrick Chen, head of Taiwan research at CLSA, the brokerage. “Trump wanted to bring employment and jobs back to the US, but Mr Gou back then was trying to run for Taiwan’s president. [The deal] would have a profound PR impact on his personal profile.”

Analysts called the project ill-conceived: LCD manufacturing is a commoditised industry that could not be more unsuitable to the high-cost US environment even with massive subsidies. None of the suppliers that are clustered around LCD manufacturing hubs in Asia are anywhere close.

After Gou’s presidential run faltered and he retired from the Foxconn top job, it fell to his successor Young Liu to clean up the mess. “We already got the land and some factory buildings there, so […] I got to find a way to use it that makes business sense,” Liu told journalists in March. The company currently produces some servers in Wisconsin and is considering making electric vehicles there from late 2023.

Foxconn last month cut its investment commitment by more than 90 per cent to $672m and its jobs promise to just 1,454 from an originally planned 13,000. Wisconsin, now headed by a Democratic governor instead of the Republican who approved the initial generous subsidies, will give $80m at most instead of the $2.85bn initially eyed.

Things could not be more different with TSMC. “There are real business reasons for diversifying their footprint,” says Jordan Schneider, an analyst at Rhodium Group, a consultancy. Analysts say the US base can help TSMC hedge against over-concentration in Taiwan, which is earthquake-prone and lives under a Chinese invasion threat. It will also strengthen the company in its competition with Samsung, its closest rival, and Intel, which announced earlier this year that it was joining the business of made-to-order chips. US customers accounted for 62 per cent of TSMC’s net revenue last year.

The FT has revamped Trade Secrets, its must-read daily briefing on the changing face of international trade and globalisation.

Sign up here to understand which countries, companies and technologies are shaping the new global economy.

But despite all this, TSMC is operating in a politically charged environment. Although Washington initially lured the company to the US to secure its defence supply chain, US carmakers and congressmen are clamouring for more onshore production of semiconductors for the auto industry, which is bearing the brunt of the current global chip shortage.

As with the Foxconn LCD idea, that makes little business sense because most car chips are made using more mature technology not typically installed in new plants. And as with the Foxconn Wisconsin plant, subsidies play a big role: new US legislation allows for $10bn in federal subsidies and refundable tax credits for investments in new semiconductor equipment.

TSMC is therefore manoeuvring carefully. Although the company continues to focus on manufacturing, research and development in Taiwan, it has left the door open in the US. The Arizona site it acquired last year is big enough to expand its operation over time into one as large as its largest plants back home.

We will now shift to cover the coronavirus taskforce briefing, where public health officials are giving an update on the Omicron variant. The CDC … END_OF_DOCUMENT_TOKEN_TO_BE_REPLACED

CRUDE OIL OUTLOOK:Crude oil prices seesaw as OPEC+ opts to stay the course on output riseAll eyes on US jobs report ahead as markets consider … END_OF_DOCUMENT_TOKEN_TO_BE_REPLACED