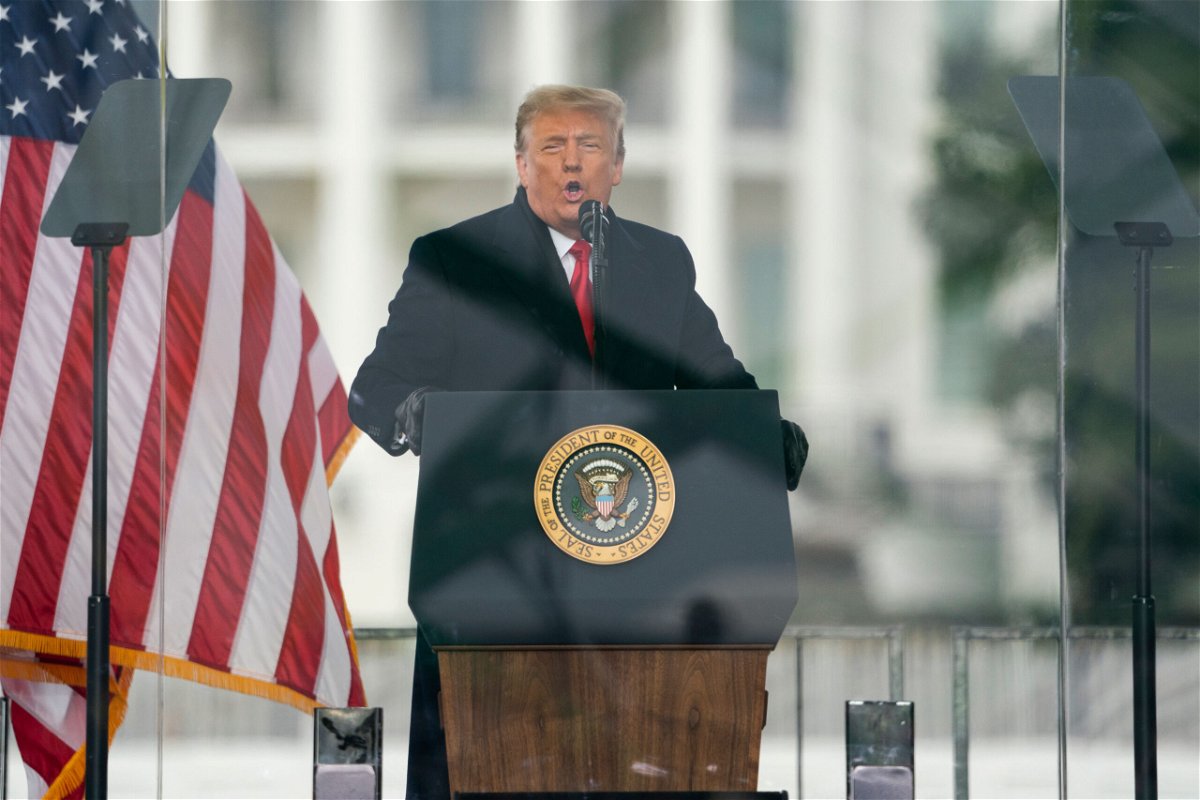 A federal judge in Washington, DC, is considering for the first time whether former President Donald Trump is immune from liability related to his supporters attacking the US Capitol on January 6, 2021.

The major hearing on Monday is part of a trio of insurrection-related lawsuits seeking to hold Trump and others accountable at a time when the House select committee probing January 6 has aggressively investigated the political leaders who inspired the attack, and as the Justice Department is prosecuting more than 700 rioters for criminal offenses.

Judge Amit Mehta of the DC District Court is looking at key questions including whether Trump and Republican figures like Rep. Mo Brooks of Alabama can shield themselves from legal fallout because of the First Amendment or their stature as elected officials.

It is the first major test of whether civil litigation is a viable route to holding Trump accountable for the violence toward Congress, after he was acquitted by the Senate in his second impeachment trial last February.

A lawyer for Trump, Jesse Binnall, argued that everything Trump said while President — including on January 6 as well as in a call to Georgia officials asking them to “find” votes in early 2021 and at campaign rallies — is protected from any lawsuits, because it was all part of his official actions as President.

“You would have me ignore what [Trump] said in its entirety?” Mehta asked minutes into the hearing. The judge pointed to a Supreme Court case related to the Johnson and Nixon administrations that established the parameters of presidential immunity.

“To say that a speech before Congress is the equivalent to a campaign trail stump speech” doesn’t appear to be what the Supreme Court had ruled on the boundaries of presidential immunity, Mehta said.

The lawmakers say they were threatened by Trump and others as part of a conspiracy to stop the congressional session that would certify the 2020 presidential election on January 6, according to the complaints. And they argue that Trump should bear responsibility for directing the assaults.

Swalwell, who described his position in the case in an interview on CNN on Sunday, said he expects Monday’s hearing to be long. He noted, however, that he and others will not be permitted into the courtroom because of the recent surge in Covid-19 cases. Instead, the participants will speak to the judge over videoconference.

If the judge rules in favor of Swalwell and others who have sued, the California Democrat said he expects “it’s going to speed up, and hopefully we’ll move to more depositions and evidence discovery very soon.”

The police officers, in their lawsuit, say they were hit by chemical sprays and objects the crowd threw at them, like water bottles and signs, because Trump inspired the crowd.

“Defendant’s followers, already primed by his months of inflammatory rhetoric, were spurred to direct action,” the lawsuit from Blassingame and Hemby said. “Had Trump committed directly the conduct committed by his followers, it would have subjected Trump to direct liability.”

Six additional lawsuits against Trump and others for their roles in the insurrection are also in front of the same court, but haven’t reached the point of being argued yet.

In the three cases before Mehta on Monday, the defendants include Trump, Brooks, Donald Trump Jr., Rudy Giuliani and right-wing groups the Proud Boys and the Oath Keepers. In court, they are distancing themselves from the actions of the crowd on January 6, and asking Mehta to dismiss the cases. According to Trump’s arguments, allowing the lawsuits to go forward would “drastically” chill political speech and prompt dozens of lawsuits aimed at damaging electoral opponents.

Trump and his top advisers haven’t been charged with any crimes. Several leaders in the Proud Boys and Oath Keepers who have been criminally charged with conspiracy have pleaded not guilty.

The Justice Department will be at the hearing to discuss its views toward the cases, in an important barometer of Attorney General Merrick Garland’s legal approach to the insurrection.

So far, the DOJ said it will not defend Brooks’ actions. According to a court filing this summer, the Justice Department argued that encouraging an attack, if proven in court, could not be considered part of Brooks’ job as a public official, and the Trump rally was clearly a campaign event and not part of Brooks’ official duties as a lawmaker.

But Mehta hasn’t decided yet how much protection Brooks could have as a member of Congress.

The Alabama Republican is representing himself in the case brought by Swalwell — while lawyers represent all the other parties — and is expected to argue on his own behalf on Monday.

Trump, for his part, has argued in court he has absolute immunity for his actions while President, another claim Mehta will consider.

The Democratic representatives’ cases specifically focus on the language Trump, Brooks and others used at the “Stop the Steal” rally on the Ellipse in Washington, DC, directly before the attack.

Trump told the crowd to “show strength” and “walk down Pennsylvania Avenue,” for instance, while Brooks, in his speech, said, “Today is the day American patriots start taking down names and kicking ass.” Also at the rally, Giuliani told the crowd to have “trial by combat.”

Following the speeches, hundreds of pro-Trump rally-goers marched to the Capitol, severely beating law enforcement officers guarding the building and breaking through barricades and windows to get inside. Many then ransacked congressional offices and some chanted “treason” as they overtook the Senate chamber, from which lawmakers and then-Vice President Mike Pence had been evacuated minutes before.

“The President has been very clear he was there at the Ellipse as President,” Binnall said in court Friday “He was advocating for Congress to take or not take certain actions. … We are dead center on immunity.”

After the Senate voted not to convict Trump last February, Senate Minority Leader Mitch McConnell pointed to lawsuits as an avenue for retribution.

The Kentucky Republican said Trump was “still liable for everything he did while he was in office” and noted “we have civil litigation” from which a president would not be immune.

The lawsuits could take months or even years to see resolutions.

This story has been updated with details from the court hearing.

A new study shows that through aerosol formation and growth, the forests are capable of mitigating climate change and have a regional effect on the … END_OF_DOCUMENT_TOKEN_TO_BE_REPLACED

Mermaid bounce house combo rental New Orleans. It has a slide, basketball goal and basketball goal. About to Bounce inflatable rentals. View About to … END_OF_DOCUMENT_TOKEN_TO_BE_REPLACED