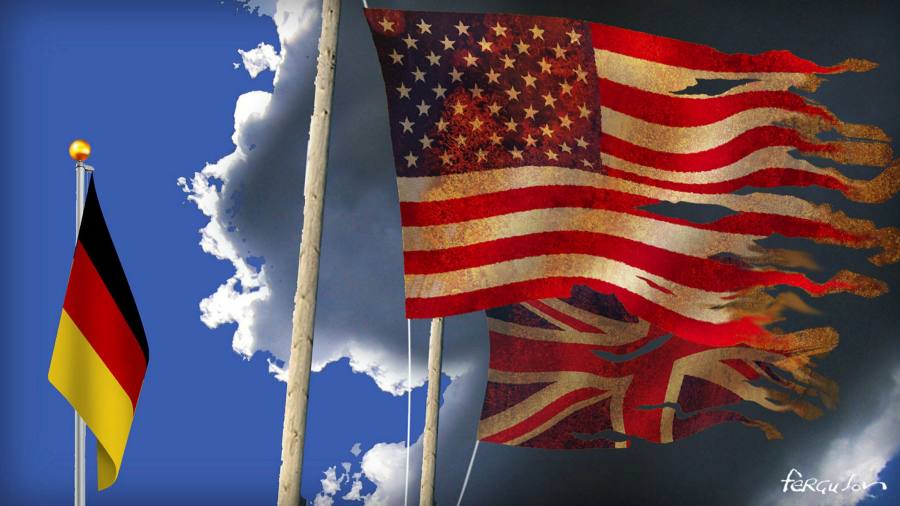 Thank God for Germany. That is not a sentiment that you heard much during the 20th century. As the second world war drew to a close, Hans Morgenthau, the US Treasury secretary, argued that the only answer to the German question was the destruction of the country’s industrial capacity. François Mauriac, the French writer, welcomed the division of the country, joking “I love Germany so much, I’m glad there are two of them”.

Thirty years on and these stereotypes about national character have been completely reversed. It is the US and the UK where politics seem increasingly prone to “angst, aggressiveness” and all those other unattractive, supposedly Teutonic, qualities. These days, it is German public life that is characterised by the virtues the British often attribute to themselves — calm, restraint, rationality and compromise.

The recent German election and its aftermath underline the point. It was a close contest, but the losers accepted the results gracefully. Nobody tried to claim that the voting was rigged or that their opponents were “scum” — or represented a mortal danger to the country.

The Social Democrats now look set to lead a German government for the first time since 2005. But a transition of power will not bring about an abrupt rupture in policies or an attempt by the political opposition to paralyse the government, as is happening in the US.

The SPD’s Olaf Scholz, who may become chancellor, ran as a continuity candidate. As my FT colleagues reported, voters saw Scholz “with his quiet demeanour, long experience in government and pragmatic politics, as Merkel’s natural successor”. How very different from the leadership profiles of Donald Trump or Boris Johnson.

This reversal of roles is not simply one of the ironies of history. It is the product of history. Unlike any other country that I know of, Germany has placed a memorial to its greatest national disgrace right at the heart of its capital. The Holocaust memorial in Berlin stands near the Brandenburg Gate, the traditional centre of the city. It is a symbol of modern Germany’s determination to acknowledge the horrors of Nazism — and to learn the lessons.

Because they know where demagoguery can lead, mainstream German politicians are allergic to the cult of the leader. No candidate for chancellor would ever boast, as Trump did, that “I alone can fix it”, or encourage chants of “lock her up” about his opponent. In the recent election debates, the party leaders treated each other with an underlying respect and restraint. They know that politics is a serious business. Frank-Walter Steinmeier, Germany’s president, is said to be particularly contemptuous of Johnson because he thinks that the British prime minister treats politics as a game.

Modern Germany is not immune to the dangers of political extremism. In 2020, a crowd of anti-vaxxers and assorted extremists attempted, unsuccessfully, to storm the Reichstag. In the wake of the refugee crisis of 2015, when Merkel allowed over 1m migrants and refugees into the country, many observers, myself included, predicted a surge in political extremism in Germany. The atmosphere in the 2017 election was often ugly. The extreme-right Alternative for Germany party won a large bloc of seats in parliament.

But in the most recent election, the political extremes of right and left both lost votes. The centre has not only held in Germany, it has strengthened. The AfD is still strong in eastern Germany, but it is further away than ever from national power.

One difference between Germany and other large western nations is that high levels of immigration have not radicalised the mainstream right. Trump came to power on the back of a promise to build the wall. Johnson won the Brexit referendum on a pledge to “take back control” of Britain’s borders and laws — particularly borders. In France, Michel Barnier, who is campaigning for the centre-right’s nomination for the French presidency, has called for a moratorium on all immigration from outside the EU. Éric Zemmour, the rising star of the far right, threatens to throw 2m people out of the country.

The German government, by contrast, continues to make the case for immigration. In August, the head of Germany’s federal labour agency said that the ageing of the country’s workforce means that Germany needs to let in 400,000 new immigrants every year — arguing that without this level of migration, “there will be a shortage of skilled workers everywhere”. Only the AfD condemned the idea outright.

The strength of the centre ground in Germany does not mean the extinction of debate. It could take months to form a governing coalition. It will be hard to narrow policy differences between the Greens, the Free Democrats and the SPD. But the very need to build a coalition militates against the political polarisation — and demonisation of the opposition — that has become standard in the Anglosphere.

In the 21st century, German politics is once again exceptional. But this time for a good reason.

The political landscape in the United States is always evolving as administrations change and the White House looks forward to a new crop of faces. … END_OF_DOCUMENT_TOKEN_TO_BE_REPLACED

Southern California home prices continued a 1 ½-year, double-digit climb last month, setting a record for the 11th time in just over a … END_OF_DOCUMENT_TOKEN_TO_BE_REPLACED