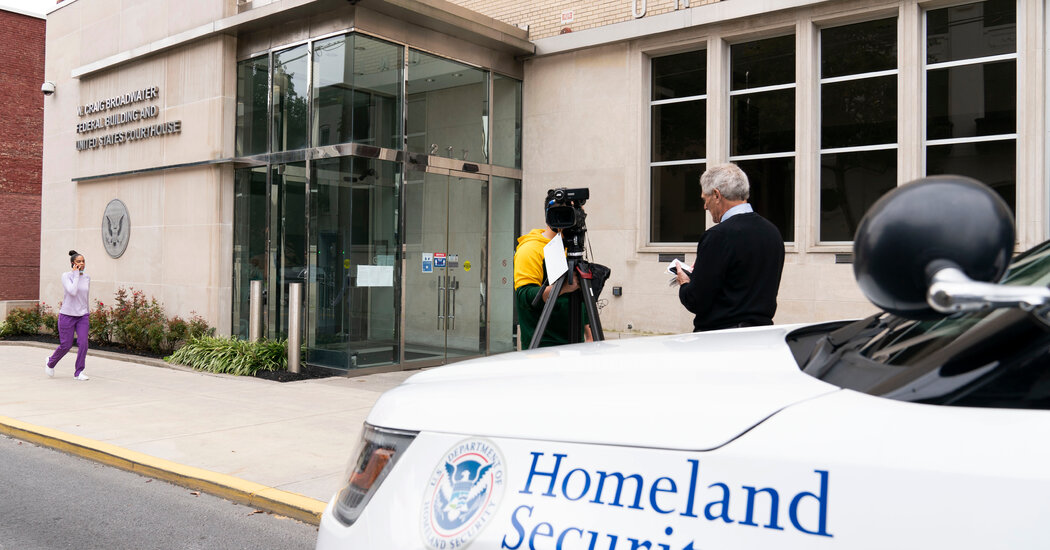 WASHINGTON — A federal magistrate judge ordered the continued detention of the wife of a Navy nuclear engineer on charges she participated in a plot to sell American submarine secrets to a foreign country.

In an order confining Diana Toebbe to the custody of U.S. Marshals, Magistrate Judge Robert W. Trumble noted video evidence presented by prosecutors that she was a willing participant in dropping classified documents in a dead drop set up by undercover F.B.I. agents and cited text messages between her and her husband in 2019 about leaving the country.

“The weight of the evidence against defendant Diana Toebbe is strong,” the judge wrote in his order, which he signed Thursday.

The magistrate judge also said that the government had not found either the full trove of documents the Toebbes were accused of trying to sell to a foreign government or the money provided to them by undercover F.B.I. agents.

The Toebbes pleaded not guilty this week to charges that they conspired to sell secrets of the Navy’s nuclear-powered Virginia-class attack submarines to a foreign country. In a detention hearing that followed, Mr. Toebbe did not contest the government’s efforts to confine him, but Ms. Toebbe’s lawyers mounted vigorous effort to have her freed before her trial.

In the court proceedings, prosecutors argued that the Toebbes had been considering fleeing the country for years. In the order, the judge highlighted encrypted text messages found on the couple’s phones after the F.B.I. raid.

“We’ve got passports, and some savings. In a real pinch we can flee quickly,” Jonathan Toebbe wrote, on March 7, 2019. Responding on the same day, Ms. Toebbe wrote: “Right. Let’s go sooner than later.”

In a hearing this week, Ms Toebbe’s lawyer, Edward B. MacMahon Jr., said the idea that Diana Toebbe was preparing to flee the country was rebutted by one clear fact: She and her husband had let their passports expire in February 2020.

Mr. MacMahon argued that with court monitoring, Ms. Toebbe was little threat to flee. Continuing to detain Ms. Toebbe would threaten her health, he said, and her two children needed the care of a parent.

But prosecutors said they had not found the $100,000 in cryptocurrency that undercover F.B.I. agents gave the Toebbes while they were gathering evidence against them. Until the money was found, they argued, Ms. Toebbe would have the means to escape.

The judge sided with the prosecutors, saying he was unconvinced by the defense argument that monitoring could ensure Ms. Toebbe would remain in the United States. Judge Trumble wrote in his order that Ms. Toebbe was a flight risk and should be detained for that alone.

He noted the 2019 text message from Ms. Toebbe to her husband, urging them to make plans to leave the country.

“Although defendant has no prior criminal history, the nature and circumstances of the charges against her and her actions demonstrate that defendant is a danger to every community and to our national security by clear and convincing evidence,” the judge wrote.

One fundamental tenet of science is its embrace of uncertainty. At its heart, true science understands that one cannot be 100 percent certain of … END_OF_DOCUMENT_TOKEN_TO_BE_REPLACED

By Betsy Klein, CNN The White House will tout a series of positive milestones for the administration’s pandemic response Tuesday as the nation … END_OF_DOCUMENT_TOKEN_TO_BE_REPLACED