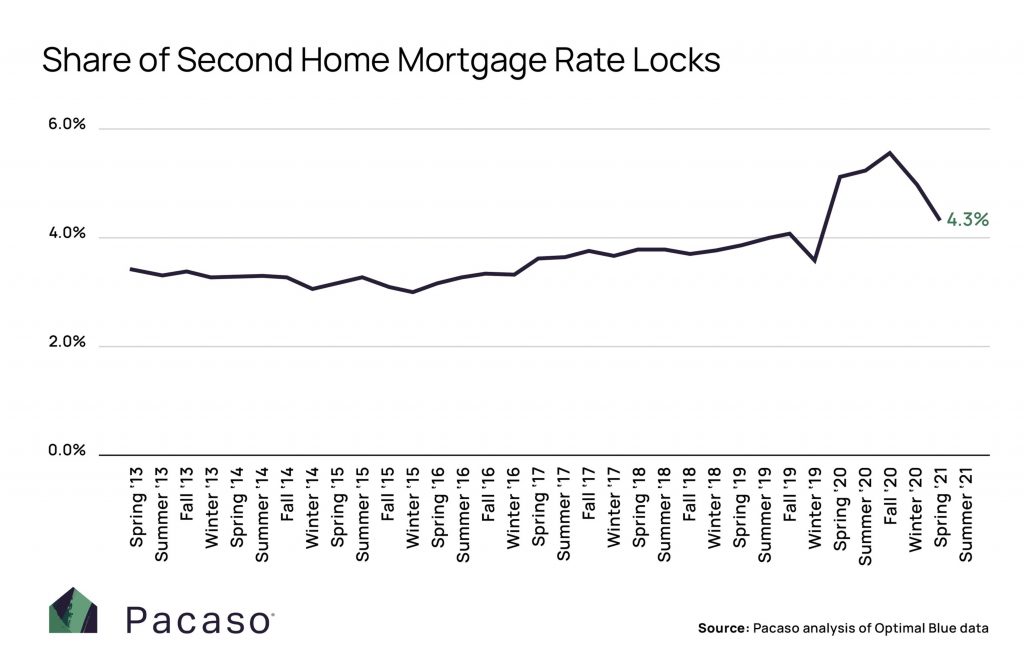 The pandemic turned housing markets on their end in 2020, but while housing prices continue to increase amid ultra-low interest rates and low inventory, second houses continue to remain a hot commodity.

“Across the nation, second home rate locks—a proxy for second home transactions—increased throughout the pandemic, peaking in summer 2020 and again in spring 2021, but falling 26.6% year over year this past summer,” the report said. “Despite this recent cooling of the pandemic-fueled second home surge, overall market share of second homes is still up from pre-pandemic levels.”

“From 2017 through 2019, second home transactions averaged a 3.8% quarterly market share of all rate locks,” the report continued. “As of summer 2021, that percentage was up from pre-pandemic levels, with second homes comprising a 4.3% market share.”

The report, which uses property use and mortgage rate lock data from Optimal Blue, found that Kauai, Hawaii saw the highest growth with home prices up to an average of $1.25 million, up 83.3% year-over-year. The island county of Kauai has seen a sharp growth in tourism since travel bans were lifted.

Across the board, second home transaction are down, but still remain elevated compared to pre-pandemic numbers. The numbers across the nation increased throughout the pandemic and peaked in Summer 2020 and again during the summer of 2021. As a whole, demand for second homes has fallen 26.6% since this summers peak.

“A year ago as Pacaso was preparing to launch, we wanted to better understand the second home market, and quickly realized there was a massive gap in local, timely second home data,” said Pacaso CEO Austin Allison. “It’s estimated that there are nearly 10 million second homes in the U.S., and with pandemic-driven shifts that have allowed people greater flexibility around where they live and work, we expect to see this number continue to grow. The second home housing market represents a significant subset of the market that is critical to watch in order to fully understand the U.S. housing market.”

Another outlier was found in El Dorado County, California, where second home mortgages and rate locks declined by 62.5% due to this summers wildfires in the area.

“It’s clear that there’s been a sea change not only in where people live and work, but also where they choose to get away from it all. The market looks completely different than it did two or three years ago,” Allison said. “It used to be that major metros were the primary hotbeds of real estate activity, and now we are seeing double-digit price growth across the entire U.S., and intense interest in second homes in places like Boise, Idaho, and Eagle County up in the Colorado Rockies. This widespread demand is creating a new wave of second home markets with more moderate median home prices but the same types of amenities and outdoor recreation options typical of their more famous counterparts.”

BEIJING, Oct. 24 (Xinhua) -- The following is a summary of published science and technology news of China. SPACE STATION EXPERIMENT SAMPLES The first … END_OF_DOCUMENT_TOKEN_TO_BE_REPLACED