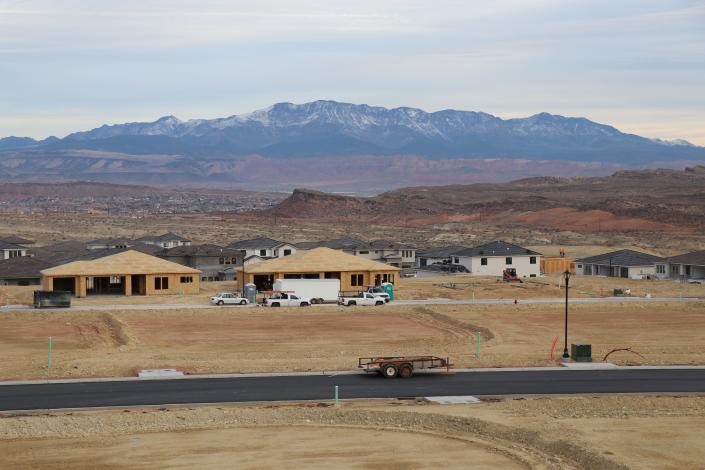 Home prices across southwestern Utah shot up in 2021, with increases spurred by the coronavirus pandemic threatening to make buying a home unaffordable for many people.

In Washington County, the median sales price for a home is now $500,000, according to the most recent report released by the real estate company ERA Brokers Consolidated. This median sale price was a 28.5% increase from last year, when the median price was $389,000.

The new price milestone marks a continuation of the area’s rapid rise in recent years. From 2015 to 2019, the U.S. Census Bureau reported the median value of a home in Washington County was $283,000.

The steep increase in sale prices is a result of a myriad of factors related to the pandemic but boils down to there not being enough supply of homes to meet the demands of buyers, according to Neil Walter, the CEO and part-owner of ERA Brokers Consolidated. In addition, this high demand has resulted in homes being listed for a much shorter time period. In November 2020, the average time a home was on the market was 44 days. In November 2021, that average was down to 29 days, which was actually up slightly from the 12-month average of 22 days.

“Yes, days on market are going up. But relative to where it has historically been, it’s still very low,” Walter said.

Historically, a home would usually stay on the market for longer than 45 days and most homes in the county are being bought.

If it’s for sale, someone will buy it

The ERA report also found that the list-to-sale ratio for homes was 97.4% in November. These numbers reflect a unique year for housing which was caused by an unexpected mix of buyers, says Walter.

“While the market in St. George was heating up, we didn’t anticipate the volume of cash buyers who would enter the market in the first and second quarter of 2021,” he said.

These all-cash buyers came to the St. George and national real estate market in the spring of 2021 and made it harder for people who need a loan to purchase a property, according to Walter. However, since spring and summer, the level of all-cash buyers has dwindled and Walter said he suspects that level of cash buyers won’t return.

Cash buyers aren’t the main reason for price increases, though. The central problem was simply that there is a high demand for homes and a low inventory of them, Walter said.

“As our population grows, we have to have more housing units,” Walter said. “And the number of housing units that we are building that are available for people who live here or want to live here is not keeping up.”

Inventory for housing has been low since the pandemic started. ERA reported that on average there were 474 available homes in Washington County’s inventory this year, which represents just 1.2 months’ worth of supply. Walter says that a stable housing market would have three months’ worth of inventory, which would be around 1,500 units. Currently, ERA estimates that Washington County has 664 housing units in its inventory.

Increasing inventory is vital since southern Utah’s population is exploding. The most recent U.S. census found Iron County grew by 24.1% and Washington County grew by 30.5% from 2010 to 2020. Both were higher than the state average of 18.1%. In 2021, these counties were two of the top three fastest-growing in the state, according to the Kem C. Gardner Policy Institute at the University of Utah.

With Washington County’s real estate market being heavily used by non-locals, it creates another factor in housing: vacation homes and short-term rental properties. Walter points to how tourism in the county seems to be more popular than ever before with St. George set to host international competitions like the Ironman Triathlon and with Zion National Park breaking visitation records.

Although the numbers aren’t exact, a 2021 report on St. George’s housing market created for the Community Development Block Grant fund estimated that of the homes not used full time in the city, 72% are used as second homes. And Washington County estimates the number of short-term rentals has risen by 800% since 2011.

Walter said that housing set aside for tourists and visitors is important since there would still be a demand to house these people while they’re in the county.

“Some of the demand for the housing market is actually getting deflected into the vacation rental space because individuals instead of buying a second home or a third home or a fourth home, they’re buying a vacation rental,” Walter said. 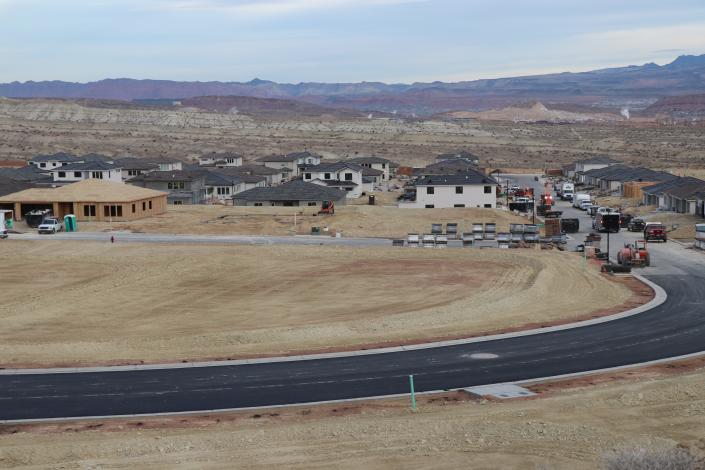 Despite new homes like these being built on State Route 7, with the housing market around St. George being extremely attractive for out-of-area buyers and vacation homes, it’s a challenging market for affordability.

But with the housing market around St. George being extremely attractive for out-of-area buyers and vacation homes, it’s a challenging market for affordability, says Walter.

“It’s a difficult challenge because of the number of people coming here from places where they have the resources to afford what today, to many people — who are local — appear to be unaffordable,” said Walter.

The concerns over affordability expressed by Walter echo those found in The Spectrum’s seven-part housing series “Overpriced, Underdeveloped”, published this fall, which looked at the housing crisis in southern Utah and what could be done. When looking for solutions, The Spectrum found high-density housing projects, changes to zoning regulations, increased government collaboration and financial incentives as potential changes that could make a difference, but communities regionwide were struggling to make them.

Walter backed similar solutions to make housing more affordable in Washington County but said that prices and the housing market won’t stabilize until inventory is added to keep up with the growing population.

It will be tough to add more housing units to the area’s inventory since there is a crunch on labor and supplies in the construction industry, according to Walter. But he says these forces could make it cheaper for developers to build more dense housing options such as townhomes and apartments which are being built at a higher rate than ever before in the county.

Still, the majority of housing being brought on the market are the traditional single-family homes, since that is what most consumers are looking for in Washington County, according to Walter.

Sean Hemmersmeier covers local government, growth and development in Southwestern Utah. Follow on Twitter @seanhemmers34. Our work depends on subscribers so if you want more coverage on these issues you can subscribe here: http://www.thespectrum.com/subscribe.

Johnson County will join Carter and Washington counties in a redrawn 3rd District of the Tennessee Senate.Meanwhile, Unicoi County will be moved out … END_OF_DOCUMENT_TOKEN_TO_BE_REPLACED

The IL-6 family of proteins has a bad reputation: it can promote inflammation, arthritis, autoimmune disease and even cancer. However, a new USC-led … END_OF_DOCUMENT_TOKEN_TO_BE_REPLACED

Biden came to office aiming to focus his foreign policy on the needs of the US middle class. Ending the pandemic, rejuvenating the nation, addressing … END_OF_DOCUMENT_TOKEN_TO_BE_REPLACED