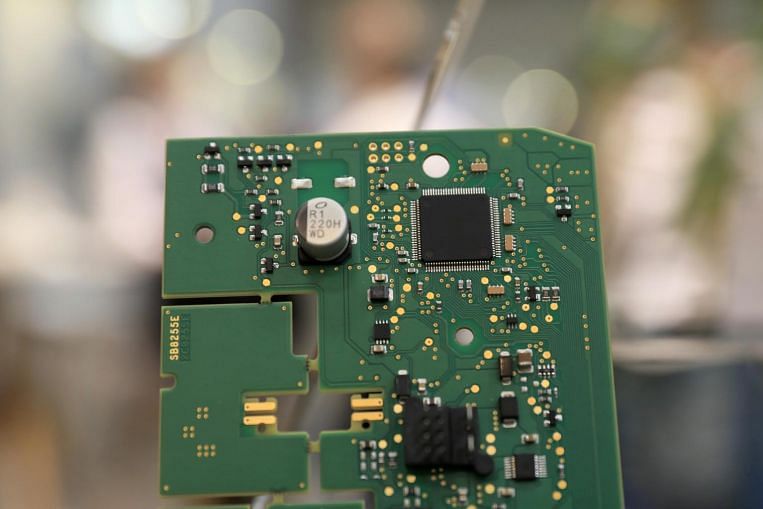 STRASBOURG, FRANCE – (AFP) – Brussels announced Wednesday (Sept 15) it is drafting legislation to ensure European Union “tech sovereignty” in the face of a global shortage of semiconductors that threatens to hobble its leap towards a digital future.

“Digital is the make-or-break issue,” she told the European Parliament in her annual State of the European Union address.

EU countries plan to spend collectively more than 160 billion euros (S$254 billion) to boost that sector in coming years – some 20 per cent of the bloc’s 800-billion-euro Covid recovery fund.

The EU’s internal market commissioner Thierry Breton said in a statement that the legislation was a key response to the chronic chip shortage, which is curtailing production of cars, computers, smartphones, game consoles and other semiconductor-reliant goods.

Much of the problem is the sudden economic surge that followed the deep and abrupt downturn caused by the Covid-19 pandemic, but a United States-China trade war is also a factor.

“While global demand has exploded, Europe’s share across the entire value chain, from design to manufacturing capacity has shrunk,” Ms von der Leyen said, highlighting the EU’s current reliance on chips made in Asia.

“This is not just a matter of our competitiveness. This is also a matter of tech sovereignty,” she said.

Ms von der Leyen said the aim of the European Chips Act would build up a “state-of-the-art European chip ecosystem, including production” which would ensure supply.

The EU wants to be the source of 20 per cent of the world’s semiconductor production by the end of the decade, according to a roadmap presented in March by the European Commission.

Mr Breton said the proposed legislation should provide tools to make sure EU chip production was monitored and resilient, and contribute to the construction of “mega fabs”, or huge fabrication plants turning out the most advanced semiconductors.

But he said it should also go beyond the supply chain by boosting European research in the sector and foster international cooperation and partnerships.

“The idea is not to produce everything on our own here in Europe. In addition to making our local production more resilient, we need to design a strategy to diversify our supply chains in order to decrease over dependence on a single country or region,” he said.

Mr Breton added that the idea of setting up a dedicated European Semiconductor Fund should be explored.

“With the European Chips Act, our tech sovereignty is within reach,” he said.

Mystery mummies from Central Asia have a surprising ancestry. These people, who displayed facial characteristics suggesting a European heritage, … END_OF_DOCUMENT_TOKEN_TO_BE_REPLACED

By Kate Bennett and Kate Sullivan, CNN The White House said Wednesday it would not be hosting a traditional Halloween celebration this year due to … END_OF_DOCUMENT_TOKEN_TO_BE_REPLACED