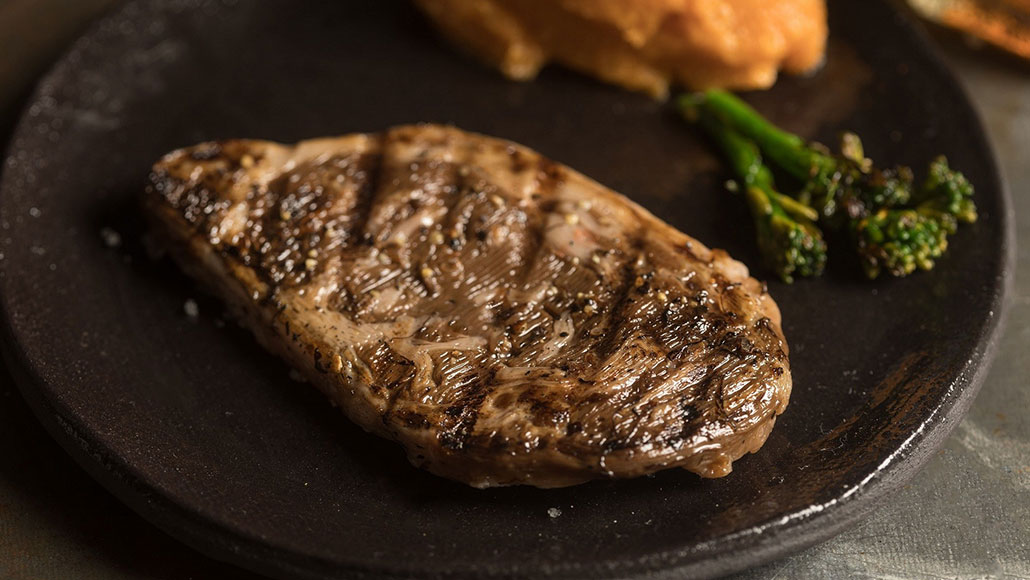 It looks like a steak. It cooks like a steak. And according to the scientists who made and ate it, the thick and juicy slab smells and tastes like a steak. A ribeye, specifically. But appearances can be deceiving. Unlike any steak found on a menu or store shelf today, this one didn’t come from a slaughtered animal.

Scientists printed it earlier this year with a bioprinter. The machine is much like a standard 3-D printer. The difference: This type uses cells as a form of living ink.

“The technology involves the printing of actual living cells,” explains biologist Neta Lavon. She helped develop the steak. Those cells are incubated, she says, to “grow in a lab.” By that she means they’re given nutrients and kept at a temperature that lets them keep growing. Using real cells this way, she says, is a real innovation over previous “new meat” products. This allows the printed product “to acquire the texture and qualities of a real steak.”

Lavon works at Aleph Farms, a company in Haifa, Israel. Her team’s steak project grew out of a partnership between the company and scientists at Technion–Israel Institute of Technology, which is in Rehovot. The ribeye is the latest addition to a growing list of meats grown in a lab instead of as part of some animal.

Researchers call these new meats “cultivated” or “cultured.” Interest in them has grown in recent years, partly because the technology shows they are possible. Advocates say that if meat can be printed, then no animal would need to lose its life to become human food.

Educators and Parents, Sign Up for The Cheat Sheet

But don’t look for these products on the store shelves just yet. Making meat this way is much harder — and therefore costs more — than raising and killing an animal. “The technology will require drastic reductions in cost before cultured meat will be widely available,” says Kate Krueger. She’s a cell biologist in Cambridge, Mass., who started Helikon Consulting. Her business works with companies who want to grow animal-based foods from cells.

The road to slaughter-free meats

The ribeye joins a growing list of cultured meat products. It started in 2013. Back then, a physician and scientist named Mark Post debuted the world’s first burger made with lab-grown meat. Three years later, Memphis Meats, based in California, unveiled a cultured-meat meatball. In 2017, it debuted cultured duck and chicken meat. Aleph Farms entered the picture the next year with a thin-cut steak. Unlike its new ribeye, it was not 3-D-printed.

To date, none of these cultured-meat products is yet on sale in stores.

Explainer: What is 3-D printing?

The companies working on them use technology borrowed from tissue engineering. Scientists in this field study how to use real cells to build living tissues or organs that might help people.

At Aleph Farms, the process of building a ribeye begins with collecting pluripotent stem cells from a cow. Scientists then place these in a growth medium. This type of cell can produce more cells by dividing again and again. They are special because they can develop into almost any type of animal cell. For instance, Lavon notes, “They can mature into the cell types that comprise meat, such as muscle.”

The incubated cells will grow and reproduce. When there are enough, a bioprinter will use them as a “living ink” to build a printed steak. It lays the cells down one layer at a time. This printer also creates a network of tiny channels “that mimic blood vessels,” Lavon says. These channels let nutrients reach the living cells.

After printing, the product goes in what the company calls a tissue bioreactor. Here, the printed cells and channels grow to form a single system. The company hasn’t yet shared how long it takes to print a ribeye from start to finish.

Lavon says the technology works, but can’t yet print lots of ribeye steaks. She predicts that within two or three years, though, cultured ribeye steaks could reach supermarkets. The company plans to start selling its first product, that thin-cut steak, next year.

Like Krueger, Lavon says costs remain a challenge. In 2018, Aleph Farms reported that producing one serving of cultured steak cost $50. At that price, Lavon says, it can’t compete with the real thing. But if scientists can find lower-cost methods, she says, then tissue engineering may stand a chance of giving beef without the moo.

This is one in a series presenting news on technology and innovation, made possible with generous support from the Lemelson Foundation.

We will now shift to cover the coronavirus taskforce briefing, where public health officials are giving an update on the Omicron variant. The CDC … END_OF_DOCUMENT_TOKEN_TO_BE_REPLACED

CRUDE OIL OUTLOOK:Crude oil prices seesaw as OPEC+ opts to stay the course on output riseAll eyes on US jobs report ahead as markets consider … END_OF_DOCUMENT_TOKEN_TO_BE_REPLACED