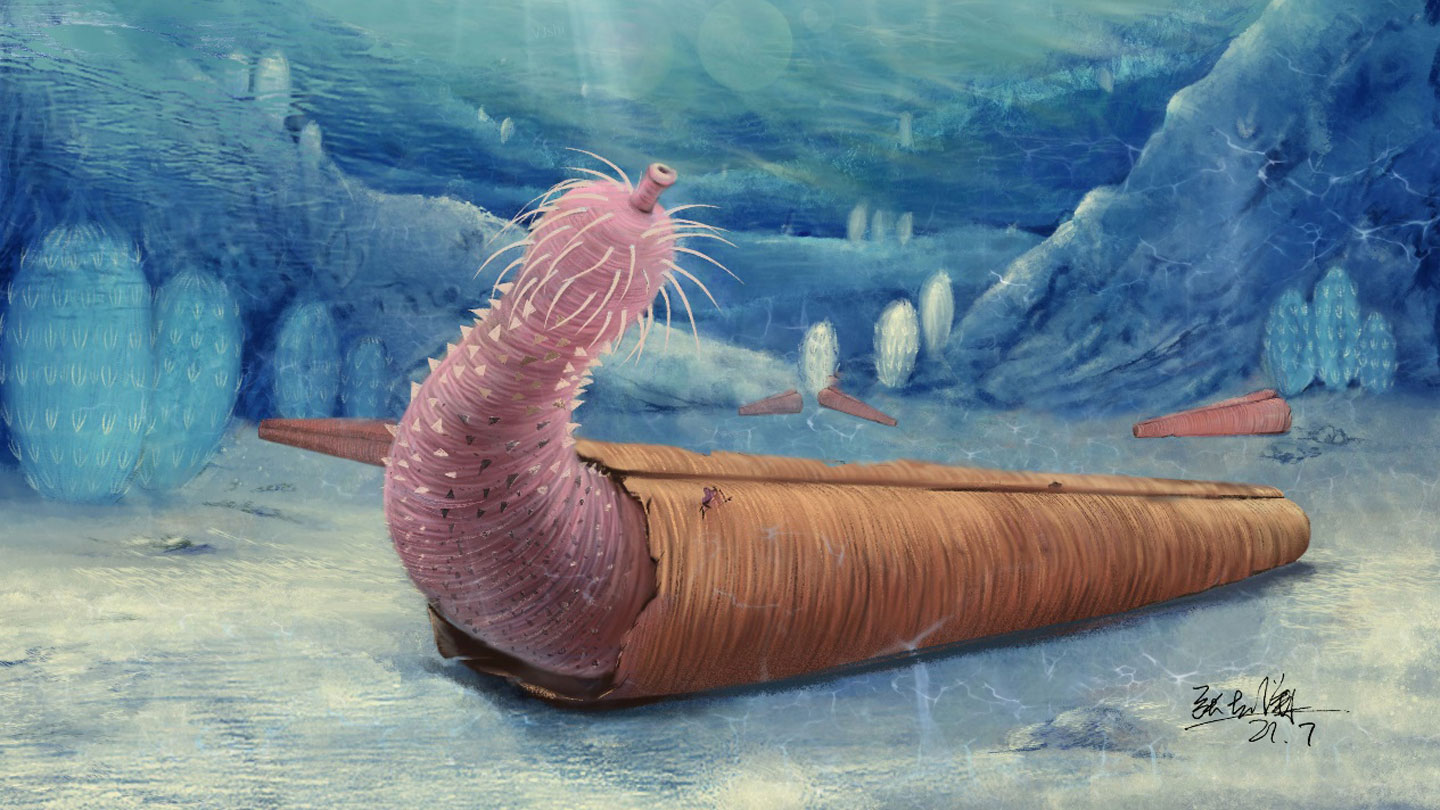 Hermit crabs have been taking shelter in abandoned shells for millions of years, but scientists now have evidence suggesting that the “hermit” lifestyle has existed far longer than that.

Besides hermit crabs, a few modern-day species of crustaceans and worms inhabit the cast-off shells of other marine creatures, mostly for protection against predators, says Martin Smith, a paleontologist at Durham University in England. Until recently, the oldest known fossils suggesting hermiting behavior were about 170 million years old, he says.

Now, Smith and his colleagues say that they have unearthed fossils of hermiting creatures almost three times that age, from a geologic period dubbed the Cambrian.

Remains of the ancient squatters were preserved in rocks laid down as seafloor sediments about 500 million years ago in what is now southern China. The cone-shaped shells that seem to hold the occupants probably had belonged to hyoliths, a once-common group of ancient marine invertebrates that died out more than 250 million years ago (SN: 1/11/17).

The marine creatures that then took shelter in those vacant shells, the researchers say, belong to a group called priapulid worms — commonly known as penis worms, thanks to their suggestive body shape.  The Chinese rocks contain dozens of empty shells, Smith says. But four of those shells appear to have been inhabited by penis worms, he and his colleagues report November 8 in Current Biology. Because there were no free-ranging priapulids preserved in the ancient sediments, the researchers propose that the worms were living inside the shells.

Fossils of penis worms seemingly occupying the empty shells of another marine creature (one shown) suggest that the “hermiting” lifestyle existed about 330 million years earlier than scientists had realized.Xi-guang Zhang/Yunnan University

A relatively consistent ratio between the size of a worm and the shell it was preserved within suggests that the animals picked a shell based on its size and then moved to another when they outgrew their adopted home, Smith says. Modern-day hermit crabs use the same strategy, though none of the 20 species of penis worms around today have this hermiting behavior.

The researchers “have made some good observations to support their claims” that the association between the shells and the penis worms isn’t merely fortuitous, says Jakob Vinther, a paleontologist at the University of Bristol in England who wasn’t involved in the research. It’s not clear, however, whether the priapulids carried the shells from place to place, like hermit crabs do, or whether the animals merely lived inside them, he says.

A great variety of creatures — including most of the major groups of animals alive today and a proliferation of predators — evolved rapidly during the Cambrian Period, which began about 542 million years ago (SN: 3/21/19). As a result, many researchers refer to that explosion of diversity as “life’s Big Bang.”

“Perhaps it’s not a surprise that some priapulids became hermits when you think about what this predatory arms race was all about: eating, ducking and hiding,” Vinther says.

We will now shift to cover the coronavirus taskforce briefing, where public health officials are giving an update on the Omicron variant. The CDC … END_OF_DOCUMENT_TOKEN_TO_BE_REPLACED

CRUDE OIL OUTLOOK:Crude oil prices seesaw as OPEC+ opts to stay the course on output riseAll eyes on US jobs report ahead as markets consider … END_OF_DOCUMENT_TOKEN_TO_BE_REPLACED