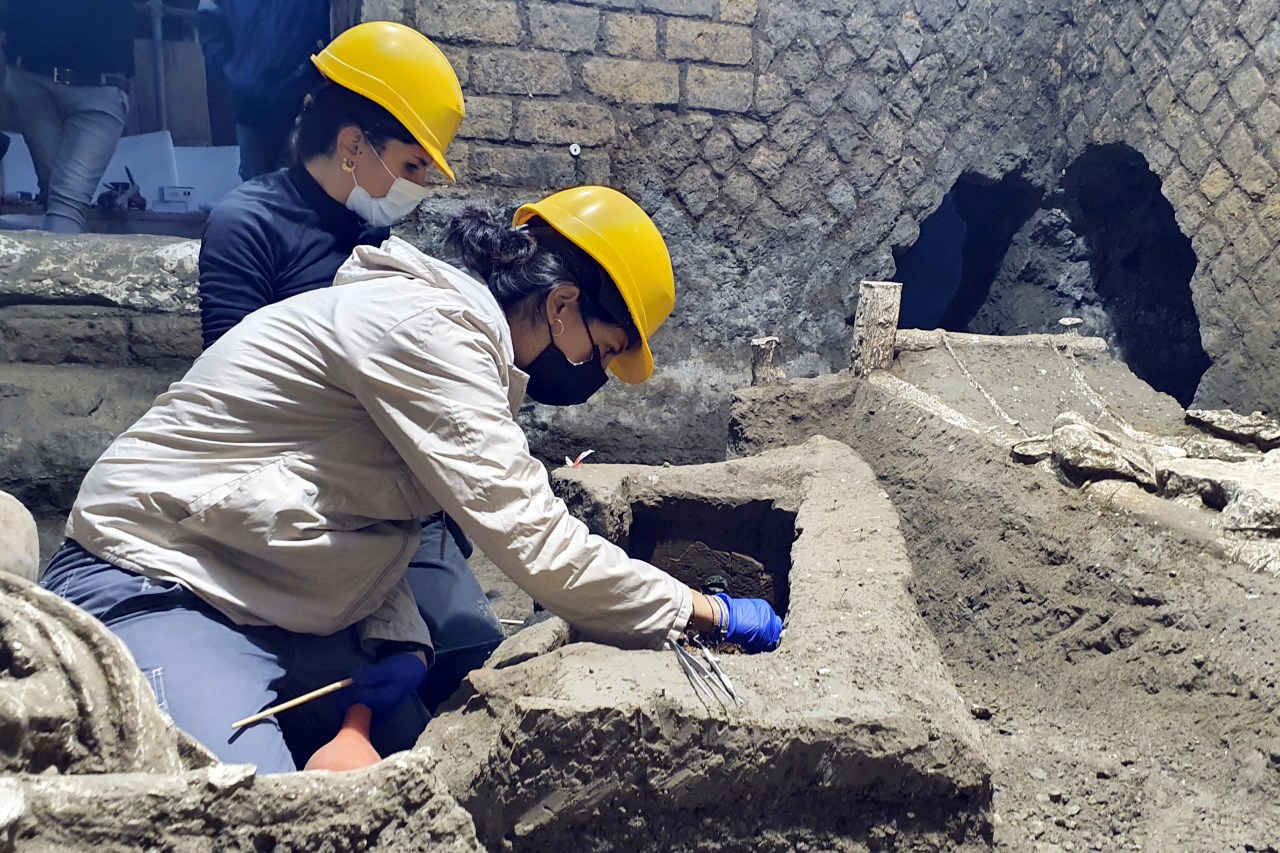 Archeologist clean up their latest finding in Pompeii, Italy. Archeologists, excavating a villa amid the ruins of the 79 A.D. volcanic eruption, have discovered a room that served as both a dormitory and storage area, which officials said Saturday offered “a very rare insight the daily life of slaves.” Italy’s culture minister, Dario Franceschini, said the find was “an important discovery that enriches the knowledge of the daily life of ancient Pompeiians, in particular the level of society still little known.”

MILAN (AP) — Archeologists in Pompeii excavating a villa amid the ruins of the 79 A.D. volcanic eruption that destroyed the ancient city have discovered a cramped dormitory and storage room that offers “a very rare insight into the daily life of slaves,” officials said Saturday.

Italy’s culture minister, Dario Franceschini, said the find was “an important discovery that enriches the knowledge of the daily life of ancient Pompeiians, in particular the level of society still little known.”

The room was discovered in a villa in the Pompeii suburb of Civita Giuliana, just a few steps from where archeologists in January discovered the remains of a well-preserved ceremonial chariot.

The room, with just one high window and no wall decorations, contains the remains of three beds made out of wood. The beds were adjustable, with two measuring 1.7 meters (nearly 5 feet, 7 inches) and one just 1.4 meters (4 feet, 7 inches), possibly indicating that a family with a child had lived there.

Nearby, a wooden chest contained metallic objects and textiles that “appear to be part of harnesses for horses,” according to the archeological park. There also was a wooden steering element for a chariot.

Chamber pots and other personal objects were under the beds, while eight amphorae — an ancient vessel used as a storage jar — were in a corner, suggesting storage for the household.

“We can imagine here the servants, the slaves who worked in this area and came to sleep here at night,” said Gabriel Zuchtriegel, the director of Pompeii Archeological Park. “We know that it was definitely a life in precarious conditions.”

The villa, with a panoramic view of the Mediterranean Sea on the outskirts of the ancient Roman city, is considered one of the most significant recent finds at Pompeii. It was discovered after police came across illegal tunnels dug by alleged looters in 2017.

Archaeologists also have uncovered the skeletal remains of two people, believed to have beena wealthy man and his male slave, who were stricken by volcanic ash attempting to escape death.

We will now shift to cover the coronavirus taskforce briefing, where public health officials are giving an update on the Omicron variant. The CDC … END_OF_DOCUMENT_TOKEN_TO_BE_REPLACED

CRUDE OIL OUTLOOK:Crude oil prices seesaw as OPEC+ opts to stay the course on output riseAll eyes on US jobs report ahead as markets consider … END_OF_DOCUMENT_TOKEN_TO_BE_REPLACED