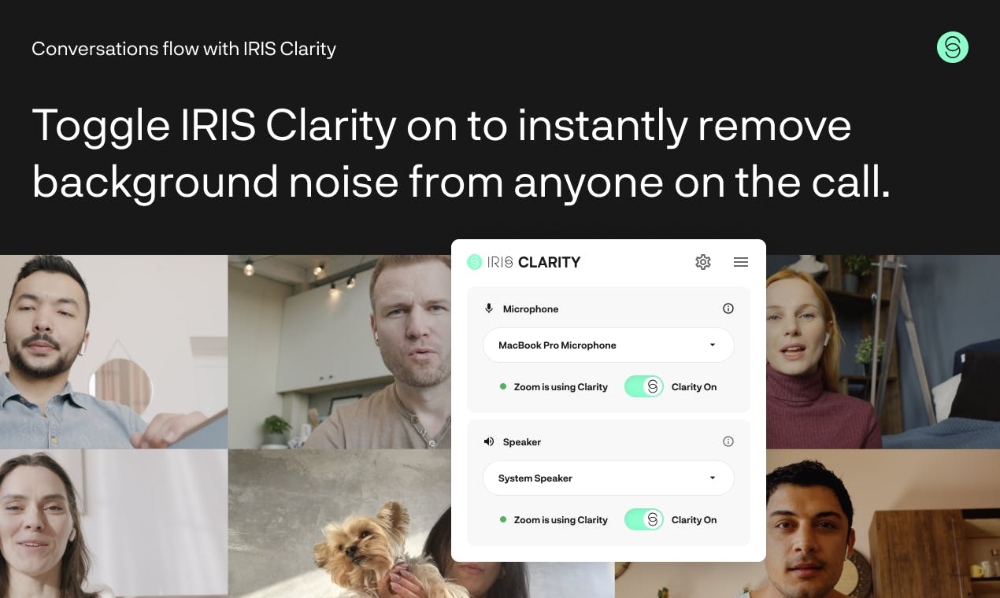 Besides potentially being overly boring, online meetings are worse when there is too much noise going on in the background. Although we’ve all come to learn to accept the barking dogs, crying babies, or loud highway traffic sounds in the background by now, what if we didn’t have to?

IRIS Clarity is a desktop app that uses AI voice isolation technology to remove all those distracting background noises from online meetings. The app is available for Mac and Windows and works across all communication platforms, such as Zoom, Microsoft Teams, and Google Meet.

Setting up the software is simple enough, and there are no complex configurations. You hit download and get started. By simply toggling IRIS Clarity on, the surrounding noises are removed in real-time. Since the technology behind the app is multi-directional, the ambient and background noises are not only removed from your audio but are removed for all participants on the call as well. Also, the app runs directly on your device, and nothing is recorded or transferred so your data is secure.

According to the company, by removing these disruptive sounds, “IRIS Clarity allows for clearer communications”, which allows for conversations having “greater focus and improved engagement”. Ultimately, resulting in a meeting where the ‘you’re on mute’ dance is a thing of the past. And, having to repeat yourself over and over again will, hopefully, come to an end.

Because of an increase in demand for video communication tools, an array of apps for video conferencing, video transcribing, and video presentations have filled the market. Each one promising to be better than the next. Whether IRIS Clarity is the best, I’ll let you decide. However, it is pretty neat, and crisp audio is something I think a lot of us would really like.

So if you’d like to see whether IRIS Clarity is as good as it sounds, their website has examples of audio clips you can listen to, such as office calls, call centers, airplane traffic control, etc so you can hear the app in action.

Overall, the AI technology behind the app is clever, and it’s very useful for teams in high-volume areas where muting and unmuting audio is a big problem.

Johnson County will join Carter and Washington counties in a redrawn 3rd District of the Tennessee Senate.Meanwhile, Unicoi County will be moved out … END_OF_DOCUMENT_TOKEN_TO_BE_REPLACED

The IL-6 family of proteins has a bad reputation: it can promote inflammation, arthritis, autoimmune disease and even cancer. However, a new USC-led … END_OF_DOCUMENT_TOKEN_TO_BE_REPLACED

Biden came to office aiming to focus his foreign policy on the needs of the US middle class. Ending the pandemic, rejuvenating the nation, addressing … END_OF_DOCUMENT_TOKEN_TO_BE_REPLACED