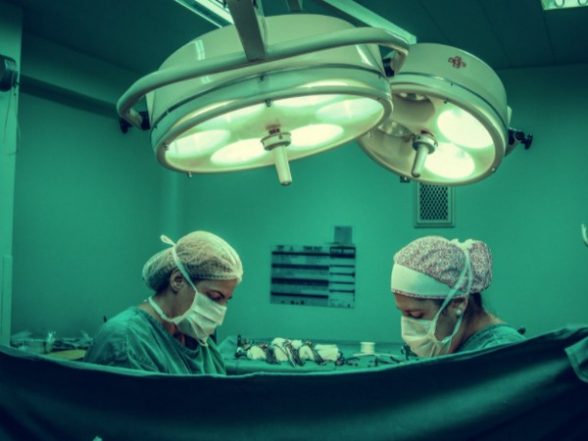 Edinburgh [Scotland], November 21 (ANI): Researchers discovered that smartphone pictures of post-surgical wounds taken by patients and then assessed by clinicians can help with the early identification of infections.

Through the findings published in NPJ Digital Medicine, researchers discovered these so-called ‘surgery selfies’ were linked with a reduced number of visits to GPs and improved access to advice among patients who took them.

The practice could help manage surgical patients’ care while they recover and reduce pressure on the NHS, experts say.Death within 30 days of surgery is the third largest cause of death globally. Surgical wound infections are associated with more than a third of deaths after an operation.

On average, surgical wound infections cost the NHS an extra 10,000 pounds per patient because of longer stays in hospital, readmissions after going home and the extra treatments needed.

Researchers from the University of Edinburgh ran a randomised clinical trial involving 492 emergency abdominal surgery patients to see if photos from smartphones and questions on symptoms of infection could be used to diagnose wound infections early.

One group of 223 patients were contacted on days three, seven and 15 after surgery and directed to an online survey.The group were asked about their wound and any symptoms they were experiencing. They were then asked to take a picture of their wound and upload it to the secure website.

A member of the surgical team assessed the photographs and patients’ responses were assessed for signs of wound infection. They followed up with patients 30 days after surgery to find out if they had been subsequently diagnosed with an infection.

The second group of 269 received the routine level of care and were contacted 30 days after surgery to find out if they had been diagnosed with an infection.

Researchers found no significant difference between both groups in the overall time it took to diagnose wound infections in the 30-days after surgery.

However, the smartphone group were nearly four times more likely to have their wound infection diagnosed within seven days of their surgery compared to the routine care group.

The research team are now conducting a follow-up study to determine how this can be best put into practice for surgical patients around the country. Artificial intelligence will also be used to help the clinical team in assessing the possibility of wound infection.

Professor Ewen Harrison, Professor of Surgery and Data Science, who led the research said: “Our study shows the benefits of using mobile technology for follow-up after surgery. Recovery can be an anxious time for everybody. These approaches provide reassurance – after all, most of us don’t know what a normally healing wound looks like a few weeks after surgery. We hope that picking up wound problems early can result in treatments that limit complications.”

“Using mobile phone apps around the time of surgery is becoming common – we are working to scale this within the NHS, given the benefits for patients in continuing to be directly connected with the hospital team treating them.”

“Since the COVID-19 pandemic started, there have been big changes in how to care about surgery is delivered. Patients and staff have become used to having remote consultations, and we’ve shown we can effectively and safely monitor wounds after surgery while patients recover at home – this is likely to become the new normal,” Dr Kenneth McLean, who co-led the research said. (ANI)

One fundamental tenet of science is its embrace of uncertainty. At its heart, true science understands that one cannot be 100 percent certain of … END_OF_DOCUMENT_TOKEN_TO_BE_REPLACED

By Betsy Klein, CNN The White House will tout a series of positive milestones for the administration’s pandemic response Tuesday as the nation … END_OF_DOCUMENT_TOKEN_TO_BE_REPLACED