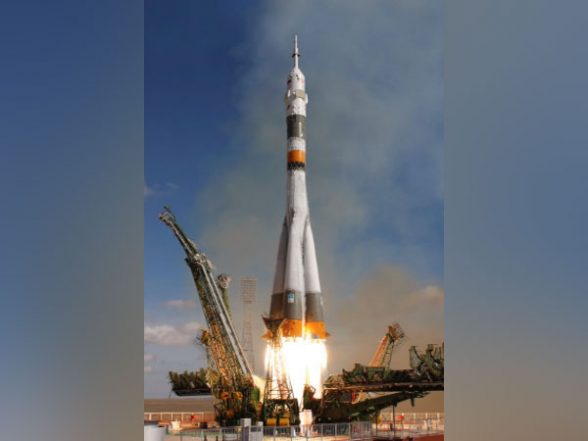 London [UK], October 19 (ANI): New methods of detecting ultra-low frequency gravitational waves can be combined with other, less sensitive measurements to deliver fresh insights into the early development of our universe, according to researchers at the University of Birmingham.

The study was published in the journal Nature Astronomy.

Gravitational waves — ripples in the fabric of Einstein’s spacetime — that cross the universe at the speed of light have all sorts of wavelengths or frequencies. Scientists have not yet managed to detect gravitational waves at extremely low ‘nanohertz’ frequencies, but new approaches currently being explored are expected to confirm the first low-frequency signals quite soon.

Also Read | Mumbai Shocker: 8-Year-Old Boy Kidnapped by Mother’s Lover While Playing Outside His House in Dadar, Rescued From Sewri.

Researchers at the NANOGrav collaboration, for example, use pulsars to time to exquisite precision the rotation periods of a network, or array, of millisecond pulsars — astronomers’ best approximation of a network of perfect clocks — spread throughout our galaxy. These can be used to measure the fractional changes caused by gravitational waves as they spread through the universe.

The question of what is producing these signals, however, has yet to be determined. Scientists in the University of Birmingham’s Institute for Gravitational Wave Astronomy, argue that it will be extremely difficult to settle on an answer using only data from pulsar timing arrays (PTAs).

The researchers suggested that combining this new data with observations made by other projects such as the European Space Agency’s Gaia mission, will help the different signals still lingering from the earliest periods of our universe to be disentangled and interpreted.

The main theory for ultra-low frequency gravitational waves is that they are caused by a population of supermassive black holes at the centre of merging galaxies.

As galaxies merge, their central black holes pair up, forming binaries and generating gravitational waves. In this case, the detection of gravitational waves by PTA would offer exciting new ways to study the astrophysics of the assembly and growth of galaxies.

But there are other possibilities too. Nanohertz gravitational waves could tell the story of our infant universe, well before galaxies and black holes form. In fact, it has been suggested that extremely low-frequency gravitational wave signals could instead be generated shortly after the big bang by other processes; for example, if the Universe underwent what physicists refer to as a phase transition at the correct temperature.

Lead author, Dr Christopher Moore, said, “The first tentative hints of a gravitational wave signal using pulsar timing arrays might recently have been seen by NANOGrav and we expect the next few years to be a golden age for this type of science. The variety of explanations for these signals is exciting, but also a maze. We need a way to tell the different possible sources apart from each other. Currently, this is extremely difficult to do with pulsar timing array data alone.”

Co-author Professor Alberto Vecchio said, “Pulsar timing arrays may offer unprecedented insights into ancient cosmological processes. Developing the sophisticated methods to interpret these insights will mean we can truly begin to understand how our universe was formed and took shape.” (ANI)

City of Hope’s National Business Products Industry (NBPI) has announced it has raised a total of $14.5 million this year for cancer research. NBPI’s … END_OF_DOCUMENT_TOKEN_TO_BE_REPLACED