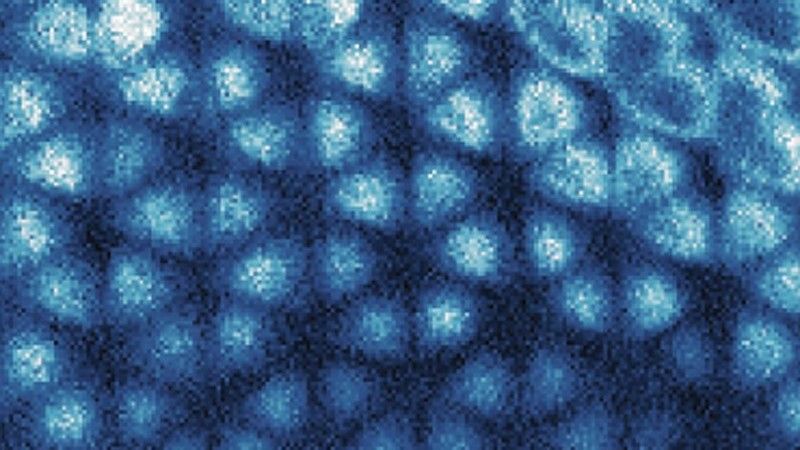 Physicists have taken the first ever image of a Wigner crystal — a strange honeycomb-pattern material inside another material, made entirely out of electrons.

Hungarian physicist Eugene Wigner first theorized this crystal in 1934, but it’s taken more than eight decades for scientists to finally get a direct look at the “electron ice.” The fascinating first image shows electrons squished together into a tight, repeating pattern — like tiny blue butterfly wings, or pressings of an alien clover.

The researchers behind the study, published on Sept. 29 in the journal Nature, say that while this isn’t the first time that a Wigner crystal has been plausibly created or even had its properties studied, the visual evidence they collected is the most emphatic proof of the material’s existence yet.

“If you say you have an electron crystal, show me the crystal,” study co-author Feng Wang, a physicist at the University of California, told Nature News.

Inside ordinary conductors like silver or copper, or semiconductors like silicon, electrons zip around so fast that they are barely able to interact with each other. But at very low temperatures, they slow down to a crawl, and the repulsion between the negatively charged electrons begins to dominate. The once highly mobile particles grind to a halt, arranging themselves into a repeating, honeycomb-like pattern to minimize their total energy use.

To see this in action, the researchers trapped electrons in the gap between atom-thick layers of two tungsten semiconductors — one tungsten disulfide and the other tungsten diselenide. Then, after applying an electric field across the gap to remove any potentially disruptive excess electrons, the researchers chilled their electron sandwich down to 5 degrees above absolute zero. Sure enough, the once-speedy electrons stopped, settling into the repeating structure of a Wigner crystal.

The researchers then used a device called a scanning tunneling microscope (STM) to view this new crystal. STMs work by applying a tiny voltage across a very sharp metal tip before running it just above a material, causing electrons to leap down to the material’s surface from the tip. The rate that electrons jump from the tip depends on what’s underneath them, so researchers can build up a picture of the Braille-like contours of a 2D surface by measuring current flowing into the surface at each point.

But the current provided by the STM was at first too much for the delicate electron ice, “melting” it upon contact. To stop this, the researchers inserted a single-atom layer of graphene just above the Wigner crystal, enabling the crystal to interact with the graphene and leave an impression on it that the STM could safely read — much like a photocopier. By tracing the image imprinted on the graphene sheet completely, the STM captured the first snapshot of the Wigner crystal, proving its existence beyond all doubt.

Now that they have conclusive proof that Wigner crystals exist, scientists can use the crystals to answer deeper questions about how multiple electrons interact with each other, such as why the crystals arrange themselves in honeycomb orderings, and how they “melt.” The answers will offer a rare glimpse into some of the most elusive properties of the tiny particles.

Mystery mummies from Central Asia have a surprising ancestry. These people, who displayed facial characteristics suggesting a European heritage, … END_OF_DOCUMENT_TOKEN_TO_BE_REPLACED

By Kate Bennett and Kate Sullivan, CNN The White House said Wednesday it would not be hosting a traditional Halloween celebration this year due to … END_OF_DOCUMENT_TOKEN_TO_BE_REPLACED